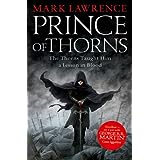 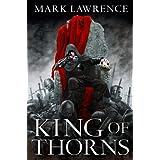 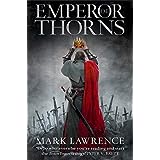 From being a privileged royal child, raised by a loving mother, Jorg Ancrath has become the Prince of Thorns, a charming, immoral boy leading a grim band of outlaws in a series of raids and atrocities. The world is in chaos: violence is rife, nightmares everywhere. Jorg has the ability to master the living and the dead, but there is still one thing that puts a chill in him. Returning to his father’s castle Jorg must confront horrors from his childhood and carve himself a future with all hands turned against him.

PRINCE OF THORNS, KING OF THORNS and EMPEROR OF THORNS are a remarkable new trilogy by one of fantasy fiction’s newest rising stars. Together, they weave a tale of blood and treachery, magic and brotherhood and paint a compelling and brutal, and sometimes beautiful, picture of an exceptional boy on his journey toward manhood and the throne.

This is a trilogy of books focusing on Jorg of Ancrath. The story focuses on Jorgs journey from Prince in the first book through to King in the second and finally his quest to become Emperor in the third. It is told in the first person and written from Jorgs perspective with each book consisting of duel storylines a present day story arc entwined with a story arc from Jorgs past, this works really well in all 3 books as both the present and past story arcs are engrossing to read and throughout the 3 books you find yourself becoming more and more invested in Jorgs story.

From start to finish this is a well written, compelling mesmerizing trilogy with a whole cast of vivid characters brought to life by the authors lyrical prose that by its conclusion will have easily justified the time you have put into it.

I do have to comment on the main protagonist Jorg though and say that this isn’t a story about good overcoming evil, the noble young farm boy fulfilling a prophecy by becoming a hero and defeating the reign of a tyrannical king, no, Jorg is as far away from being good or a hero as it gets and in any other book he wouldbe the villain. He is evil, amoral and at times comes across as both a psychopath and lunatic and his is a very dark blood soaked tale. In fact most of the characters veer to the dark and evil side, there are still a few good characters to show that not everyone’s bad in the world  and the author does a good job of showing there’s a fine line between good and evil and that the difference between the two isn’t always black and white and that there’s a thousand shades of grey between what canbe classed as right and wrong.

If you didn’t like the first book there’s nothing in the sequels to make you want to read them but if you have read and were mildly intrigued by Prince of Thorns then both King and Emperor are worthy reads and a decent continuation of Jorg’s journey and if you haven’t read any then give them a go as if you can get past the fact that little Jorgy is a violent murdering psychopathic anti-hero he is also a captivating character that will take you through a range of emotions and often you will find yourself laughing, hating, smiling and feeling his pain along with him, then you are in for an extremely enjoyable crazy time as he takes you on his dark unforgettable if at times uncomfortable epic journey.

Praise also goes to the author Mark Lawrence for writing what I found to be a shocking conclusion to the trilogy. I didn’t see it coming but now in reflection feel it was the right way to end Jorg’s story.