Hi Timandra, Welcome to my blog, I hope today finds you well and thankyou for agreeing to take part in this interview.

For the first part of the interview I’d like to ask you about your book (Touch of Iron Volume 1-The Living Blade), influences and future writing plans.

1-Would you please tell us about your book?

-In short, Touch of Iron is a grimdark fantasy story about a young woman who realizes how broken her world is and eventually becomes the hero that world needs, but not the one it deserves … If I may quote Batman: The Dark Knight.

2-Your book is Grimdark fantasy what made you choose that specific genre to write about?

-I’m a reader before I’m a writer. So it was an easy choice because I love reading grimdark, and have loved it before Joe Abercrombie ever coined the term (much to his chagrin, nowadays). Writers like Glen Cook and David Gemmell have been with me for a long time, as have military history novels like Bernard Cornwell’s Warlords Trilogy or his Last Kingdom series. These are the books I grew up on. So it made sense that my own would be, well, grim, and dark, and realistically gritty. (Not military, though. Yet. Nyahahaha.)

3-Is the book a stand alone or part of a series?

-It’s the first volume of what will foreseeably become a five book series (or a pentalogy, because I stick with Greek). Don’t think I can tell the whole story in just three books, and four is such a straight number … 😉

4-What was your favourite part of writing the book?

-My favourite part is the sitting and dreaming up of ‘what happens next?’ It’s an organic process, one scene feeding into the other. It’s like watching the pre-viz of a movie I want to make. My second favourite part has become the moment I get my first draft back from my story editor, because then I can see how to make it even better.

5-What are you currently working on?

-On the second book in the series, obviously. It’s currently untitled, I’m afraid.

6-What are your ambitions for your writing career?

-Well, I’m self-published by choice. I never ran the ‘getting published’ gauntlet, and I love that that is a viable option in this our digital age. I wouldn’t mind getting picked up by a traditional publishing house – it worked for Andy Weir. Dreaming big, I’d say bring in HBO, bring an Amazon Orignals Series of The Living Blade in Game of Thrones quality. Please, please, PLEASE!

Both feet back on the ground, I’d like to be a full-time writer and dedicate all my time to doing what I love. My biggest ambition would be a collaboration with any one of my author heroes.

7-Have any authors influenced your work?

-I have a freight train load of influences from all over the place as you can see above. The strongest, though, are those writers who made such a deep impression on my mind that I wanted to write my own stories. There are many honorary mentions, really, but I would be remiss if I didn’t mention Joe Abercrombie and his First Law trilogy first. I had just become a young mother and as a young mom, you tend to do a lot of sitting around, nursing. So I used that time to read. I remember finishing The Last Argument of Kings one late night, and thinking, there should be more books like this, only with really well written female heroes. Like what if Logen Ninefingers were a girl (and, y’know, not from the cliché barbarian north)? So I did what any reader would do: I searched high and low in every bookshelf for those kind of stories. But I couldn’t find any I liked. So, in the end, I figured, dammit I’d have to write the books I want to read.

So, next: Tolkien, obviously. Now, I love the Lord of the Rings and could say many good things about it, but … The Silmarillion has become a touchstone in my life. I read it every year at least once, or parts of it every now and again just to check and see if I still am who I was when I was fifteen. (I’m not, of course, but my core has proven strangely resilient to all that life has thrown at me so far.) I’m a big mythology geek anyway (I live in Beowulf country afterall), so reading The Silmarillion was an eye-opener – you could do this with fiction, too? Awesome.

Thanks for answering the questions, now before the second part of the interview I’d like to take a moment for some light heartedness and put you on the spot. Asking you what your own character would be like if you ever chose to write a character based on yourself:

1-What would your name be?

-Ha! I’m bad at names … Probably something mundane, though. Like Jane or Anne. No Sindarin names for me. 😥

2-Would you be of low-birth or noble-born?

-Low birth. Noble born ladies don’t have much fun. Too much stitching to do in drafty rooms full of other women. Also: long dresses and silly hats. Me no likey.

3-Would you be the hero/heroine, anti-hero or villain of the story?

-None. I would choose to be a wandering bard (bardette – is that a word? It is now. Thank me later.) So, I’d be someone who knows the stories, the lore, and who listens to the re-tellings beside the fireplaces of traveling companies, next to the hearths of the low born families, in the high halls of the nobles. I’d ply my trade, and tell stories. Or sing them. Also, I’d totally get to rock on a lyre, so how awesome is that? Heroes don’t often get to do that, and villains even less.

4-Most characters in Grimdark always seem to have weapons handy, what would be your favoured weapon of choice?

-My wit. (I stole that one from Patrick Rothfuss.)

If I found myself at wit’s end, I’d go with explosives. Not to do too much damage – although I imagine that’d be fun – just for the distraction. I’d sneak off in the resulting chaos and cloud of smoke, and everyone would believe I had magic powers. It would be awesome. Though probably not very grimdark…

OK, so we’ve learned about your book, future plans for writing and what your character would be like of you ever write yourself in a book. 🙂 Now would you please tell us a bit about yourself, so we can find out about the author behind the work.

1-When did you decide to become a writer?

-I’ve always written things, dabbled a little in fanfiction, too. For a long time, my dream was to become a comic book writer, like Neil Gaiman and Alan Moore. But I started down this path just after my daughter was born, so nearly about 7 years ago now. (I’m a lot better at it, too. Practice makes better, not perfect. I think I still have some mileage on Malcolm Gladwell’s 10,000 hours to Mastery.)

2-Why do you write/What inspired you to become a writer?

-For the inspiration, see above. But I write for two reasons, now. The first is obvious: I like to entertain with a good story because that is how I love to spend my own free time. It’s the principle of reciprocity. What goes around comes around.

The second is: to see on paper who I am. This might sound weird, but it’s true. Writing is like stripping to your soul, it’s reflective like a mirror. Basically, with a well-trained eye, you can see any writer sprawled naked on their pages. Writing, I see all these issues in my characters, in my self-chosen themes that I have myself – all the questions, the flaws, the not-having any answers. And I believe that once you see them, good writers can make those fuckers dance.

3-Have you read any good books recently?

-Hell yes. I read Mark Lawrence’s Broken Empire trilogy and was swept off my feet by the fantastic writing, the poetic language, and of course, by Jorg of Ancrath. I re-read it recently, slower this time, to savour the beauty. Such good books. I also read Lawrence’s first two books of the Red Queen Trilogy and am enjoying it so far, looking forward to Wheel of Osheim. Also, Scott Lynch’s Gentleman Bastards are great. And I always manage to slide in a Practchett or two. I love Night Watch (old Discworld), and the (newer) Tiffany Aching novels.

4-What are your top three favourite books of all time?

5-How can readers discover more about you and you work?

-I have a blog that gently weeps because of reckless abandon: www.timandrawhitecastle.com

Also the obligatory social media stuff for writers nowadays: a Goodreads profile, Twitter @timwhitecastle. I have a Facebook page, too. And a Pinterest board or two … Generally, if you hit me up on Twitter, I’ll probably respond the same day, depending on time zone. If you find an Easter Egg in my book, shout out via Twitter!

For my work: behold the power of the mighty Amazon, bringing you floods of awesome books right to your doorstep. And for a limited time, you can get my book for free over at www.choosybookworm.com or enter a Goodreads giveaway for one of ten available signed printed editions.

Well, that concludes the interview, thank you very much Timandra for taking the time to take part in this interview, it’s greatly appreciated and I wish you success with your book.

-Thank you so much for the chance to do this, and for the awesome questions.

Before you go, do you have any last words or thoughts for the readers of this interview?

-Yes. 1. Read my book. Go on, you know you want to. 2. Sign up to my newsletter to get the latest news, release dates, and much more. And 3. DON’T FORGET TO BE AWESOME!

In some quality news for you US folks, starting on Wednesday (15th) Timandra willbe running a Kindle Countdown Deal where the book will cost only $0.99 on Wednesday (June 15th), then merely a dollar more on each consecutive day. 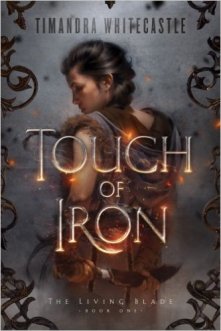 Is the Living Blade real or just a legend?

With it… Prince Bashan could win back his kingdom.
Master Telen Diaz can free himself of the burden from his past.
Owen Smith sees a once-in-a-lifetime chance to gain untold knowledge.

… but for Noraya Smith, the Living Blade will bring nothing but suffering and sorrow.