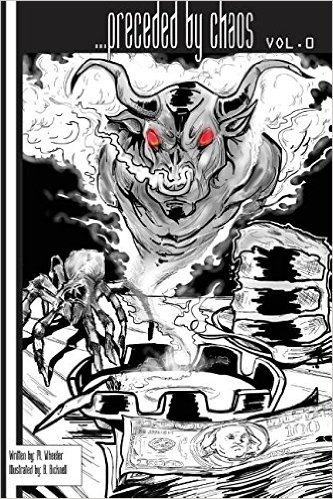 …Preceded by Chaos is an illustrated short story. The protagonist, Mitchell Weaver, is a young Emergency Medicine doctor. Mitchell has entered a high stress, distinguished profession with the burden of a variety of particularly disturbing personal demons that he must battle every day in order to maintain the faCade of sanity and control. The initial installment of the series, Volume 0, introduces the reader to Mitchell at a point in his life where he has begun to realize that many of his prior indulgences and deficits are no longer compatible with his current life of responsibility.

I received a free copy of this illustrated short story from the publisher in exchange for an honest review.

Thus, Mitchell and Sam embark on an international chase to track them down. The duo arrive in Birmingham, England but it’s during the day and they soon realise that there are no wicked and sumptuous delights of the body, soul and mind (drink, drugs and sex) for Stampson and Matic to partake in and realise that it’s a lost cause. Back on the trail they then head to Berlin, Germany, where Mitchell and Sam themselves embark on a foray into some delectable drunken debauchery catching a glimpse of Stampson in a nightclub in the process.

Stampson tells them that Matic is in Amsterdam and that he will be there for the next couple of days and that’s where we head to next on the grand journey, finally reaching the crux of the story that is, the two duo’s are now incomparable and that what once tied them together back in the day no longer exists. Mitchell and to a lesser degree Sam found that they had to lose themselves and what they have achieved (functional, reliable and successful members of society) to try to reconnect with and find help from old friends.

There’s nothing wrong with the writing style per se, it’s solid, reads adequately  and is straight to the point – with a fair bit of swearing that may put some people off, then again, the drink, drugs and fornication in the story might do that to anyway!

However, the writing sadly lacks any power to pull you into the story attempting to be told or make you care about the characters.

Being an illustrated short story and not a graphic novel, there are only sporadic pieces of artwork strewn throughout the books 65 page length.

The art does add to the story being told and the artist has his own unique style. As you can see from the cover being in black and white, that’s the art direction in the book to, no colours insight on this one but it’s overall a decent simplistic style that could look good if done correctly.

Sadly, and it’s not the artists fault so I AM NOT knocking his work though I have to say that the art really wasn’t for me, but respect to anyone creative as any sort of creative media and output (poetry, writing, art, music) isn’t easy.

(My sincere apologies for the poor quality of the two photographs, I tried to find images of the artwork on the internet to use in this review and abjectly failed. Finally having to result in taking my own – but at least you can see some of the art included).

No, the major problem with the artwork stems from the quality of the book itself! At times the black colouring is off and you can see lines in the art where not enough ink has been used. Worse though than that is on quite a few of the pieces of art, the writing is blurred and out of focus making it hard to even read the captions.

Then, lastly the art is pixelated in places throughout the book, this shouldn’t happen in a published illustrated story/graphic novel as it looks cheap and poor quality.

Being honest the pixelated effect on the artwork makes the book look unprofessional and it looks like something you could have printed from your home computer!

I read this short in roughly 30 minutes and that’s no time really for me to complain about losing ! Being called Vol 0 the short acts as a prologue building for future volumes to be released. However, I felt like I was thrown mid way into a story and that I was reading a chapter in a longer book – thankfully I wasn’t!

Unfortunately Preceded by Chaos didn’t engage me at all, plain writing, unlikeable characters who get upto predominantly nothing but depraved acts throughout the entire book apart from Mitchell’s moment of clarity and self realisation at the end (that’s why it’s getting one star and not zero).

I think that there is a worthwhile story in here waiting to be told and that it may become more clear and apparent in any future volumes that expand on Mitchell’s character but for this volume I can’t recommend it.

The only recommendation I can give is to the publisher, firstly, offer this for free to anyone who is interested as there will be people out there who will like it, it’s definitely an acquired taste and while it wasn’t for me it could lure some people in.

Secondly, an omnibus edition could be an idea including this with the next volume to give people an overall better idea of what is going on.

And, lastly, please sort out the issues with the lacklustre and shoddy quality of the artwork in the book, the blurred writing and pixelated images are a detriment to the actual artists work and it makes the book look like it was printed it from a  home printer!