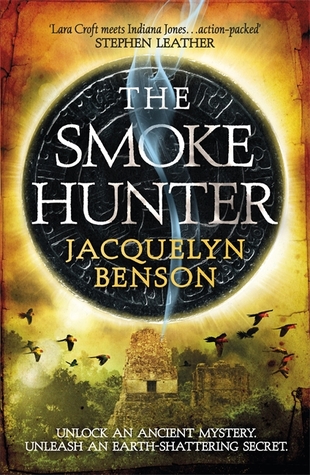 Chasing a threat born in smoke…

London, 1898. Archivist Eleanora Mallory discovers a map to a legendary city . But is it the key to unravelling an ancient mystery or a clever hoax?

Compelled to find out, Ellie journeys to Central America – with a merciless enemy hot on her heels.

In a race to uncover the map’s secret first, Ellie is forced to partner with maverick archaeologist Adam Bates, a man she’s not sure she can trust. Together, they venture into an uncharted wilderness alive with smoke and shadows, where an even greater danger awaits them.

For what lies there whispering to be unearthed has the power to bring the world to its knees.

Join Ellie and Adam as they battle rivers of scorpions, plummeting waterfalls and pre-historic death traps on the journey to uncovering a deadly secret that could shake the fate of the world.

Today on TheTattooedBookGeek I’m privileged to be taking part in The Smoke Hunter by Jacquelyn Benson Blog Tour, bringing you an extract from the book.

Henbury pulled a paper from his briefcase, uncapped his pen, and scrawled a signature across the page. He stood, Ellie echoing his movement instinctively. He handed the page to her.

“Your notice of dismissal. Effective immediately. You will not receive a reference. You will collect your belongings and remove yourself from the premises.”

Ellie, back straight, reached out and snatched the page from Henbury’s hand.

“Good day, Miss Mallory,” he said as she turned to go.

“You mean good riddance, Mr. Henbury,” she corrected him, then spun on her heel and marched out of the room.

She continued, head high, down the hall to her desk, which sat under a window in the archivists’ office. Everything on it was neatly organized, from the ink, blotters, and catalog forms, to the documents she had left that Friday evening.

As she sat down, she heard a quick rush of whispers from across the room. They came, she knew, from Langer and Johnson, whose desks were closest to the door. The pair had never liked the idea of working alongside a woman— particularly not one who was just as well qualified as they were. Better, in fact. Johnson had graduated tenth in his class at Nottingham. Ellie had been first in hers at the University of London, which was a more reputable institution.

What on earth am I going to do?

The thought came unbidden, and she quickly shunted it aside. It had brought with it a sudden trembling in her hands, and she could not afford to show uncertainty, not while hostile eyes were studying her every move from across the room.

She took a deep breath, forcing herself to calm. Then, her movements even and crisp, she lifted her valise and began to remove her belongings from her desk. They were meager enough. The process took only a few minutes. All that remained were her works in progress, which, as always, had been meticulously notated as she went along. Any of the other clerks would be able to pick up where she left off— even Johnson.

That left only one thing. She pulled the psalter from her skirt pocket and allowed herself a little smile of satisfaction at the notion that Henbury would have to do some hunting once he realized he had lost it.

Let him be inconvenienced, she thought.

It was too soon to go. It would look like she was running away, and she didn’t want to give Johnson, Langer, Henbury— any of the lot of them— the satisfaction of thinking they had made her scamper off like a scared kitten.

She would take a few more minutes and indulge her curiosity. She carefully removed the black ribbon binding the book and opened it.

Inside she found not a collection of psalms but a mutilation. The center of the holy book had been carved out, leaving a compartment in the now-hollow pages. Within it lay something impossible.

The disk- shaped medallion was made of dark, gleaming stone, heavy and almost metallic- looking. An odd pattern of notches was carved into its circumference, and a hole was drilled into a peak at the top, as though it was meant to be worn as a necklace or an amulet. But it was the engravings on the surface that riveted Ellie’s attention, making her forget the rustling papers across the room and the clatter of traffic outside the window.

A grinning idol was carved onto the surface, its face decorated with slashing horizontal lines. It held a knife in one hand, the other having been replaced by a writhing snake, and angular, batlike wings protruded from its shoulders. A round disk covered its chest, and the whole figure was surrounded by whirling lines, like streams of smoke.

Ellie risked a glance around the room. The rest of the archivists worked quietly at their desks, either oblivious to her presence or purposefully ignoring it. She quickly turned her chair to face the window, which provided better light than the electric lamp and also allowed her to put her body between the artifact and any surreptitiously prying eyes. Then she delicately plucked the strange object from the book.

She stared down at the artifact wonderingly. The reverse side was carved, like its circumference, with deep, deliberately shaped notches. The remaining flat surfaces were inscribed with blocky glyphs. Ellie recognized the style. It resembled the Mayan icons and characters she had studied at the university.

If it was true, then the object she held must be ancient. Though her education at the university had leaned more toward the classical, there had been a series of lectures on Copán and the other Mayan cities. All of them had been abandoned centuries before the first European explorers had set foot in Central America. It meant that what she had in her hand was almost certainly more than a thousand years old. How on earth had it ended up inside a psalter in the archives of the Public Record Office?

Ellie ran her fingers over the cool surface, filled with wonder. She had read about the relics of past civilizations, studied them in books and drawings until she knew the names of the pharaohs and the caesars as well as, if not better than, those of her classmates. For all of that, this was the first time she had held a piece of ancient history in her hands. They almost tingled with the sheer awe of coming into physical contact with the forgotten past.

But what was it doing in a hollowed- out book of psalms?

Looking for answers, she forced herself to shift her attention to the rest of what lay concealed in the book. She lifted out a piece of parchment, yellowed with age. She unfolded it, her eyes falling to a few lines of text scrawled elegantly along the back of the page.

They were written in Latin, which she translated with ease.

Map indicating the location of the inhabited city discovered by Fr.

Salavert of San Pedro de Flores, which may be supposed to lie behind the various legends of the land of El Dorado.

She knew the story as well as anyone— a legendary city of unthinkable riches, supposedly hidden in the unexplored wilds of Central or South America. The dream of its wealth had led countless explorers and adventurers to their deaths, including Sir Walter Raleigh, whose imprisonment and eventual execution resulted from his failed mission to find the place.

Unfolding the document the rest of the way, Ellie saw that she was, indeed, holding a map, drawn by hand in painstaking detail. Rivers, marshes, and mountains were carefully indicated. In the center, marked by a small drawing of a stepped pyramid, was a place labeled, in the same flowing hand, “The White City.”

It had to be a hoax. El Dorado, after all, was a fairy tale.

But that wasn’t what the author of the map was claiming. A city that lay behind the legends . . . was it so impossible a notion? Many myths and stories had their roots in fact, however distantly.

So there you have it, what do you think to this enticing extract?? Has it piqued your interest in the book??

One of the author quotes for the book is: ‘The illegitimate love-child of Lara Croft and Indiana Jones… Fast-paced and action-packed’ – Stephen Leather.

And, throw into the mix the naming of El Dorado in the extract, that damn name got me reminiscing over Uncharted and Nathan Drake to!

The Smoke Hunter by Jacquelyn Benson is available to purchase: 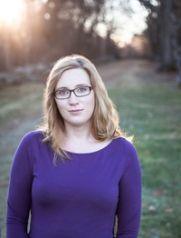 Jacquelyn Benson has always known who she wanted to be when she grew up: Indiana Jones. But since real archaeology involves far more cataloguing pot shards and digging through muck than diving out of airplanes and battling Nazis, she decided to devote herself to shamelessly making things up instead.

Jacquelyn studied anthropology in Belfast, Northern Ireland and married a man from Dublin, New Hampshire. She wrote a thesis on paranormal investigators and spent four years living in a museum. When not writing, you may find her turning flowers into wine, herding an unruly toddler, or hiding under a blanket devouring genre fiction. THE SMOKE HUNTER is her first novel.

Well, that concludes my stop on The Smoke Hunter Blog Tour, I’m Drew (TheTattooedBookGeek) and I have been your host.

Thanks for stopping by and if your interested the Tour schedule can be found below: 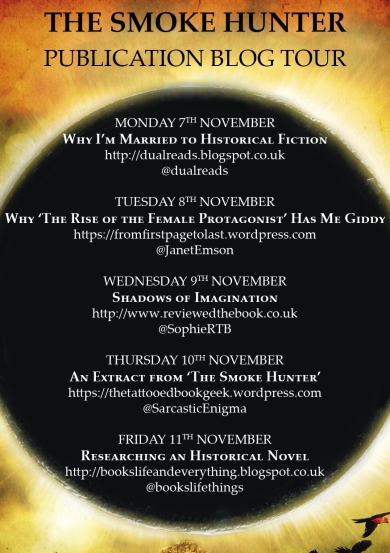