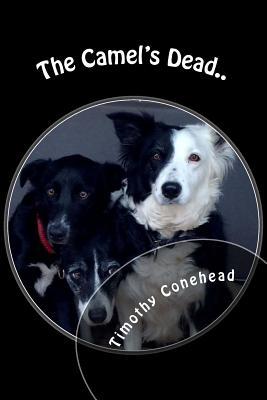 This is a tale of a nine month old puppy who was discovered to be living in somebody’s car as the owner could not control him. Timothy was taken on as an emergency foster by Kathleen who although had rescued many collies over the years has never had a puppy – until now! This is Timothy’s Diary as he comes to live with her other collies Jack Laddie and Freya. His diaries are full of innuendo and he fondly talks about his ‘sexy times’ with Freya and anybody else who will entertain him. Life in Kathleen’s House of correction is funny as the young boy manages to misunderstand almost everything he is told and he secretly posts his blogs on Facebook whenever he can.

I received a free copy of this book courtesy of the author in exchange for an honest review.

There will probably be a few of you wondering about this book review about a dog taking place on my blog! I can hear the questions, but it’s not some weird fantasy book like you normally read?? What’s going on?? Have you left grimdark behind and gone soft on us?? Well my fellow bloggers, the answer to that is both yes and no. No, I haven’t gone soft and I am still the sarcastic tattooed degenerate whom you all know (admit it, part of my appeal is the sarcasm, poetry and all around awesomeness of my blog). But, on the other hand, yes, as I have always had a soft spot for animals (especially dogs) and animal companions in books (Storm and Craf in The Faithful and The Fallen series by John Gwynne, Mr Jingles in The Green Mile by Stephen King, Nighteyes in The Farseer trilogy by Robin Hobb).

When the author contacted me on Facebook with regards to reading her book, she did so as I had owned a Border Collie myself. Mine (Sully) sadly had to be put down back in February 2016 due to the bastard that is cancer.

Anyhow, after having one that had played such a huge part in my life for over 12 years, I couldn’t help but feel a pull to accepting Phythian’s offer to review her book about her youngest Collie Timothy.

Timothy himself was an emergency rescue for Phythian, having fostered and trained many Border Collies throughout her life she had never had one quite so young as Timothy, being only 9 months old when she took him into her care. He had been mistreated, being locked in a bathroom, muzzled and locked in a car. Originally, she was going to foster him after a permanent home could be found, two of her other dogs at the time were old-timers (Jack was 16 and Laddie was 14) who along with Freya made up Phythian’s family of dogs and Timothy was a young and boisterous handful. But, that wasn’t to be Timothy’s fate as in the end Phythian didn’t foster him out, Timothy’s bountiful enthusiasm, ebullient manner and all around spirited nature won her over, deciding instead to keep him and with the aid of trusty companion Jack train him to be a part of their family.

Clocking it at just over 100 pages in length the book itself is a fairly short read. Told in the style of Timothy’s diary it’s a quick and easy to pick up read. I finished it in two days but with the style it’s a book you can easily pick up when you just have a few moments to spare, are enjoying a coffee, etc as you can peruse a couple of the diary entries put it down and then go back to it later at your leisure.

The writing style incorporated is uncomplicated and straightforward as Phythian brings Timothy’s tale to life. It’s a humourous book but also has some moments of meaning within to. Anyone who has had a dog will know the pain of losing one but also the joys that come with having them in your life to, for most (in my view, it should be for all) a dog is more than just a “pet” they are a companion and a friend. One of the later parts written not with Timothy’s voice but Phythian’s own can’t help but pull on your heartstrings.

The additions of photographs strewn throughout the book are a nice addition and touch giving the book more of a personal feel as you get to see pictures of Timothy and the other dogs, they are his family and he’s proud of them.

Told from Timothy’s point of view, the book simply put, is fun. Timothy is a great narrator as you follow him on his adventures in “the house of correction”. His voice is a rather mischievous one thanks to his overzealous nature and rambunctious behaviour, also being prone to bouts of innuendo, over exaggeration on his part for his punishments as he misconstrue what’s going on, regaling you with his exploits, worries and thoughts.

You can tell that the book is a labour of love for Phythian who has spent her life adopting and fostering Border Collies, she’s a dog lover and Timothy’s tale is an endearing read. It’s a pleasure and a joy for both people who like animals and especially dog lovers. Though only short in length there’s a lot to be found within.

It’s a dog’s life and Timothy’s is one waggishly (yes, I went there and used waggishly as in dog wags their tail) uproarious narrative. 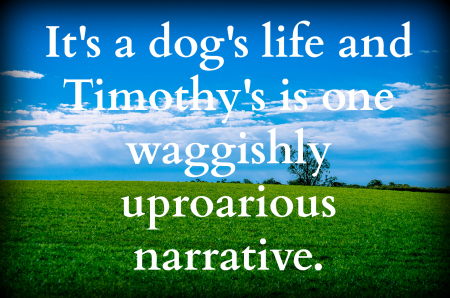 40 thoughts on “The Camel’s Dead: My Name Is Timothy Conehead the Invincible and I’m a Border Collie Book Review”