Welcome to 200 Words or Less, a weekly Friday feature here on The Tattooed Book Geek where I will bring to you reviews/thoughts of 200 words or less from the books I read before I started blogging. We all have them, books that we read and loved or even read and hated before we decided to start blogging and what better way than a quick fire review of 200 words or less to share your thoughts on them.

Ride with the Horsemen of the Apocalypse as they seek to unearth a plot that could plunge all of Creation into chaos!

Ages before the events of Darksiders and Darksiders II, two of the feared Horsemen—Death and War—are tasked with stopping a group of renegades from locating the Abomination Vault: a hoard containing weapons of ultimate power and malice, capable of bringing an end to the uneasy truce between Heaven and Hell . . . but only by unleashing total destruction.

Darksiders is one of my favourite game franchises, apart from a couple of pain in the ass puzzles the games give hours of enjoyment and are both top-notch.

Darksiders: The Abomination Vault is a prequel taking place eons before the events of the games.

Darksiders focuses on the four horseman of the apocalypse, Death, War, Strife and Fury (though the later two only play very minor roles).

Darksiders 1 concentrated on War while Darksiders 2 concentrated on Death with the storylines taking place concurrently. The Abomination Vault features these two characters, adding lore to the world, complexity to both characters and their back-story.

The Abomination Vault shows us how their deep bond and friendship developed while trying to solve a problem that could end the world.

Death is agile and cynical with a witty and sarcastic undertone while War uses brute force and prefers to obey the rules with a stoic and blunt personality. They are opposites, often bickering like a couple of siblings, together they make a formidable double act.

A quick and easy well written fun read, decent and descriptive world building and lots and lots of action!

Quotes from Darksiders: The Abomination Vault:

“Your sarcasm is unwelcome here, Horseman,” the Crowfather rasped at him. “Pity. It seems determined to follow me everywhere.”

“If even one of you takes so much as a single shot at that crow”, he told them, his tone matter-of-fact, “then after you are dead, I will summon your spirits to provide me with the names of your siblings, your parents, and your children. And I will animate your corpses to murder them with your own hands”.

“Creation is quite impressionable. Everyone leaves a trail of their actions. And everyone, however wise, however powerful, however immortal, makes mistakes. All it requires is the patience to wait for them. And you’ll find no one, in all Creation, quite so patient as Death.” 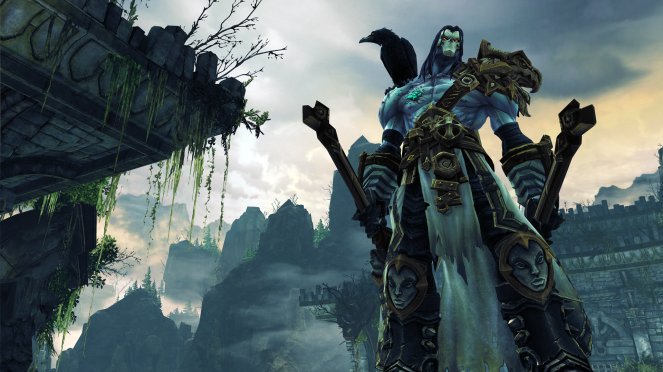 17 thoughts on “200 Words or Less: Darksiders: The Abomination Vault.”