Today on The Tattooed Book Geek I am very pleased to be bringing you all an interview with fantasy author Damien Black, author of the book Devil’s Night Dawning – The First Book of the Broken Stones Series – (released on 26th July 2016).

Welcome Damien and a massive thank you for agreeing to appear on my blog and taking the time to do this interview.

1 – Would you please tell us about Devil’s Night Dawning?

DB: It’s essentially dark/epic fantasy so it’s heavy on the horror – yes there are knights and kings and heiresses, but also demons, ghosts, evil spirits and demonologists. The book centres around two monks, who are members of a sacred order tasked with tracking down witches and fighting supernatural creatures. It’s really got everything going on: war, questing, political conflict, magic, hauntings, great escapes, exorcisms, duels… You name it, I’ve got it!

2 – If you had to sum up Devil’s Night Dawning in one sentence, what would it be?

3 – Is Devil’s Night Dawning a standalone or part of a series?

DB: It’s the first instalment in a saga. I imagine the series will run to at least four lengthy books, quite possibly more. I know there have been issues around some fantasy authors not completing epics, but I’m still quite young and confident of finishing the Broken Stone Series with time to spare!

4 – What was your favourite part of writing the book?

DB: My favourite part was… writing the book! I loved every part of the process: from when I first conceived the world in which it’s set, to outlining the synopsis for Broken Stone, to writing the first draft of Devil’s Night Dawning, to editing it. The only part I don’t like is liasing with beta readers, designers and the like – I hate being a boss, chasing people up I can do but it’s not my thing really.

5 – The cover for Devil’s Night Dawning is quite simple but very cool and smart looking making for an overall quality aesthetic, did you design the cover yourself?

DB: I didn’t! I went to the excellent people at Red Raven for that. They presented me with five mock-ups and after taking some advice from friends I went with the most understated one. Devil’s Night Dawning is quite slow-paced to begin with; it has quite a few subtleties worked in amongst the more obvious action sequences. So I wanted a cover to reflect that. I passionately believe that fantasy at its best is a literary genre, so I wanted something fairly classy to represent that.

OK, we’ve learned about your book. Now, I’d like to change tact for a different section of the interview. I think it would be fun to find out what type of character you would be, if you were writing yourself as a character in a book.

1 – What would your character name be?

DB: He is a bastard born son of a licentious nobleman and a temple prostitute. He was given to the mystic Order of the Budding Lotus to be trained as one of their monastic warrior-sages.

3 – What type of character would you be? Good guy? Bad guy? Anti-hero?

DB: Good guy. Any world needs them, because let’s face it they’re in short supply.

DB: I would be an ascetic monastic type, with psychic powers, a mighty intellect and perfect equilibrium.

5 – What would be your weapon of choice? Is the pen mightier than the sword or do you choose something to illicit visceral limb severing carnage?

Last part of the interview. We’ve talked about your book, your character and now I think it would be interesting to find out more about you, a sort of uncovering the veil and seeing the person behind the book.

1 – When did you decide to become a writer?

DB: I knew I wanted to be one from about the age of 10, when I wrote my first fantasy novel (I never finished it). But I had troubled teenage years and as a result of that I fell into drinking and drugs and became a rock musician instead. I returned to the written word when I retrained as a journalist. Around that time I started to rediscover my love of all things fantasy. Finally I knocked the drinking on the head and put the guitar down… The writing has been getting stronger since then.

2 – Why do you write/What inspired you to become a writer?

DB: For me it’s part therapy, part calling. I’m not a massively spiritual person though I try to meditate and pray when I can – really if anything gets me close to God, it’s writing. I can’t really explain it… It’s like when I’m on good form with it I feel connected to the best part of myself.

3 – What do you find to be the most rewarding part of writing?

DB: I think it’s when you read back over something you’ve written and think ‘that isn’t too bad at all’. It’s being able to see what you’ve crafted and take pleasure in that. That’s why reviews are so important – it confirms that you’re not just blowing smoke up your a***, that you really have written something good that others can appreciate.

4 – What are you currently working on?

DB: The second book in the Broken Stone Series. I’m quite close to finishing the first draft, though in the past few days I’ve had to take a bit of distance to decide exactly how to wrap it up. The tricky part of writing a saga is knowing when to break for each instalment – there aren’t always natural breaks like the end of a war or the death of a major character that present themselves. I expect to publish the book later this year.

5 – Devil’s Night Dawning is described as ‘high fantasy meets gothic horror’ what is that made you want to be a fantasy author/write this genre?

DB: I think for me it was a desire to have a quasi-medieval world where not only the exterior life – castles, tournaments, knights, kings, damsels, monks etc – was represented, but the interior world too – superstition, faith, magic, and so forth. I read the Name of the Rose by Umberto Eco years ago and was struck by how horrifying a medieval person’s psychological landscape must have been – they really believed that their world touched on another peopled with all sorts of unimaginable terrors. I mean nowadays you’d have to have a really bad LSD trip to experience a superstitious person’s mindset in the Middle Ages…!

6– Have any authors influenced your work?

7 – What are your top five favourite books?

DB: That’s always a tough one. OK, in no particular order: The Lord of the Rings, The Silmarillion, A Tale of Two Cities, The Talisman, Heart of Darkness. Ask me on a different day and you’ll probably get a different answer!

And finally, the last question, you can breathe a sigh of relief as I’m sure you’re regretting agreeing to this arduous journey by now! It can be either a fun or a serious answer.

8 – If you could change one thing about the state of the world, what would it be and why?

DB: I would compel democratically elected politicians to utter the following truthful statement: “We don’t represent your interests; we are really here to serve the banks and corporations who run this world from the shadows.” Then let’s see what happens… probably not a lot to be honest, but it would be nice not to be lied to for a change.

Well, that concludes the interview, many thanks Damien for taking the time to visit my blog, it’s been a pleasure having you on The Tattooed Book Geek and I wish you all the best. Do you have any last words for readers of this interview?

DB: Everyone should live in a castle. Oh, and buy Devil’s Night Dawning, of course… Thanks for having me, it’s been a real pleasure! 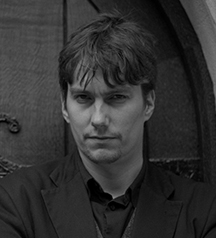 For as long as he can remember, Damien Black has been blessed and cursed with a hallucinogenic imagination. His sleep is disturbed by strange dreams that he struggles to remember upon waking, glimpses of worlds where superstitions are reality and prayers might actually work.

The only cure he knows for this malady is writing, an auto-exorcism he performs on himself daily. Over the years, these scribblings have evolved into horror-strewn tales that plot a winding course through the tropes of fantasy fiction.

Damien can be found: 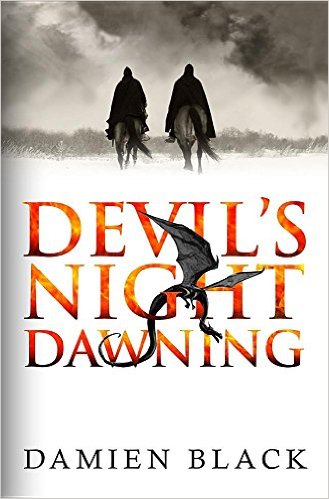 For centuries, the monastic Order of St Argo has stood between the mortal vale and the dark forces of the Other Side. Now a mystery warlock seeks an ancient power to rule realms, and only two of its witch hunters can stop him – if they can stay alive long enough to identify him…

When young novice Adelko is assigned to legendary adept Horskram, he rejoices at the chance to lead an adventurous life. An adventurous death isn’t what he had in mind – but it comes calling when they learn of a sorcerous theft, one that could bring ruin on the Known World. They suspect a demonologist at work, but don’t know anything for sure.

Whoever it is knows who they are and wants to silence them – permanently. As they flee from one danger to another, their homeland erupts into civil war – the rebellious southern barons have reunited and want to dethrone the King of Northalde. The world they know teeters on the brink of a momentous struggle that will reshape it forever…

High fantasy meets gothic horror in this gripping tale of suspense, conflict, faith and magic – the first part in an epic saga of sweeping proportions.