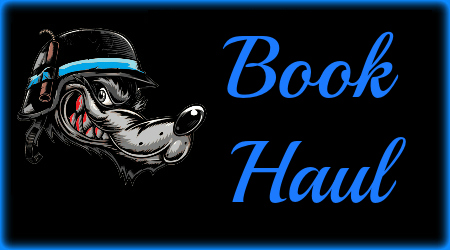 Today’s book haul post is a two for the price of one, yes, I was lucky enough to receive two books on the same day, thank you post person, it’s always a pleasure when you deem to deliver instead of moaning about it, sigh, anyone would think that it wasn’t the post persons actual job to deliver mail!

Anyhow, onwards, onto the books!

Firstly, The Irregular: A Different Class of Spy by H. B. Lyle, courtesy of bookbridgr and releasing May 18th through Hodder & Stoughton. 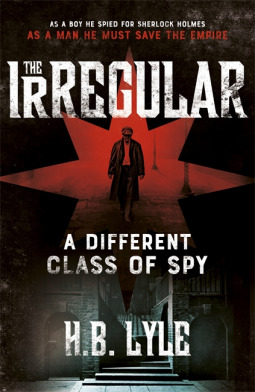 London 1909: The British Empire seems invulnerable. But Captain Vernon Kell, head of counter-intelligence at the War Office, knows better. In Russia, revolution; in Germany, an arms race; in London, the streets are alive with foreign terrorists. Kell wants to set up a Secret Service, but to convince his political masters he needs proof of a threat – and to find that, he needs an agent he can trust. The playing fields of Eton may produce good officers, but not men who can work undercover in a munitions factory that appears to be leaking secrets to the Germans.

Kell needs Wiggins. Trained as a child by Kell’s old friend Sherlock Holmes – he led a gang of urchin investigators known as the Baker Street Irregulars – Wiggins is an ex-soldier with an expert line in deduction and the cunning of a born street fighter. ‘The best’, says Holmes.

Wiggins turns down the job – he ‘don’t do official’. But when his best friend is killed by Russian anarchists, Wiggins sees that the role of secret agent could take him towards his sworn revenge.

Tracking the Russian gang, Wiggins meets a mysterious beauty called Bela, who saves his life. Working for Kell, he begins to unravel a conspiracy that reaches far beyond the munitions factory.

Whilst I am predominantly a fantasy fan I do on occasion like to dabble in other genres, and this book really caught my eye, I’m looking forward to delving into it.

Pre-order The Irregular (May 18th).

Secondly, Tyrant’s Throne (The Greatcoats #4) by Sebastien de Castell released April 20th by Jo Fletcher books in the UK and June 6th in the US. 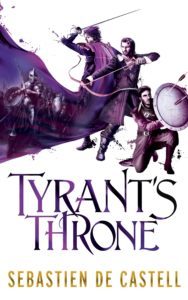 Would you – could you? – uphold the law at the cost of those you love?

After years of struggle and sacrifice, Falcio val Mond, First Cantor of the Greatcoats, is on the brink of fulfilling his dead King’s dream: Aline, the King’s daughter, is about to take the throne and restore the rule of law once and for all.

But for the Greatcoats, nothing is ever that simple. In the neighbouring country of Avares, an enigmatic new warlord is uniting the barbarian armies which have long plagued Tristia’s borders – and even worse, he is rumoured to have a new ally: Trin, who’s twice tried to kill Aline to take the throne for herself. With the armies of Avares at her back, she’ll be unstoppable.

Falcio, Kest and Brasti race north to stop her, but in those cold and treacherous climes they discover something altogether different, and far more dangerous: a new player is planning to take the throne of Tristia, and the Greatcoats, for all their skill, may not be able to stop him.

As the nobles of Tristia and even the Greatcoats themselves fight over who should rule, the Warlord of Avares threatens to invade. It is going to fall to Falcio to render the one verdict he cannot bring himself to decide: does he crown the girl he vowed to put on the throne, or uphold the laws he swore to serve?

I love this series, it’s a fantasy version of The Three Musketeers and is well worth reading. Tyrant’s Throne is the last book in the quartet and as such it wil be a book to savour and enjoy.

Purchase Tyrant’s Throne in the UK & Pre-order in the US.

The other books in The Greatcoats series:

I’m currently working on a couple of 200 words or less posts for the first two books in the series (Traitor’s Blade & Knight’s Shadow) as I read them both prior to starting blogging, but I was lucky enough to receive a copy of the third book (Saint’s Blood) to read and review not long after I had started blogging, to tempt you with the series I will include my review for that book below: 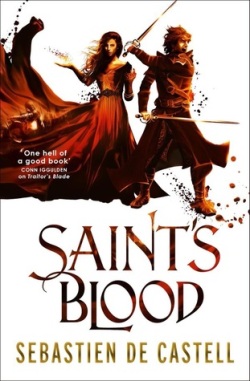 Saint’s Blood is the third book in Sebastien de Castell’s Greatcoats series and I highly recommend that you read the first two books Traitor’s Blade and Knight’s Shadow as they are both quality reads that are well worth your time. While technically you could read this book without having read the previous two, I really wouldn’t suggest it as you’ll get far more out of the world, story and characters if you start the journey from the beginning.

All of the main characters, Falcio, Kest, Brasti, Aline, Valiana and Ethalia continue to grow and develop both in character and in their relationships, as do all of the smaller characters who while playing a role in the story aren’t the main players. In particular for me I thought Aline showed alot more growth in this book and really came into her own. There’s a scene late in the book between her and The Greatcoats that really comes across as poignant and made me feel like The Greatcoats have come full circle from everything that has happened over the series so far and for what’s still to come. Likewise the introduction of a new character in the guise of the Inquisitor Quentis Maren adds yet another dynamic and facet to the group and I found him to be a really interesting character.

While there’s a fairly large cast of characters, Falcio, Kest and Brasti are the core trio, to borrow a phrase alot of reviewers seem to say they are the swashbuckling fantasy version of the Three Musketeers.

All three have individual personalities and are different in their own way. Together they have such a strong bond of friendship and the interplay, camaraderie and banter between them is one of the many highlights of the series. Out of the three, Brasti is my favourite, you can’t help but smile at his quips and remarks and I find him to be the perfect foil for Kest’s more stoic seriousness.

One character I will mention who I believe deserves a section of this review all to himself is Duke Jillard of Rijou, he’s a vile, evil person with a penchant for torture and by all accounts as a reader you should hate him and in the two previous books I did. But in Saint’s Blood he shows some small measures of surprising growth and even dare I say it humanity. However I found myself liking the character far more and as the reader I saw him changing from the one dimensional evil character I thought he portrayed in the previous books to a far more complete character. His relationship with Falcio is complex and multi layered, and I found some of the books most poetically written passages took place between them. One of the many stand out moments in Saint’s Blood for me involves one of those poetic conversations and takes place very late during the book, showing both the complexity of their relationship and the understanding between them.

The world building has always been of a high standard and multi layered and that’s no different in this book, being the third in the series we know the world, it’s history and it’s lore but the author continues to expand and explore that world.

Saint’s Blood focuses more on the church than the previous two books, hence the title has Saint’s in it!

And we delve far deeper into the history of The God’s, Saint’s and Religion, this works really well as it’s interesting to learn more about and also provides an epic story arc for the book.

This is a great series, that gets better with each book, while Traitor’s Blade was good, an impressive debut and decent start to the series, Knight’s Shadow improved on it in every way and with Saint’s Blood de Castell has managed yet again to top his previous book by creating what will surely be one of the best fantasy books of the year. The writing is of an exceptional standard, there are no wasted words and the story moves along at a fast pace with the 570+ pages flying by as you follow Falcio and his merry bunch on their epic, dark, despairing, harrowing and at times both hopeless and hopeful tale. Your pulled in from the first page through to the last in this fast paced, character driven epic where come the final page you are left wanting more!

One of the main things I look for while reading a book is how much do I care about the characters, do I care if they live? If they die? Do I laugh with them? Do I feel their pain? Do I care if they succeed or fail in their quest? For me if you care about the characters and their story it’s what takes a book from readable to a must read and this series does that as de Castell has created a group of characters you really care about. Throughout the book your taken on an engaging journey and really put through the emotional wringer as you follow the characters and the predicaments and situations that they find themselves in.

Now the question is, if you haven’t already joined The Greatcoats then why the hell not?!?! This series is a must read and well deserving of your time!

To sum up how much I enjoyed the book, I shall give you one sentence of my infinite, all knowing, manly, benevolent wisdom:

‘With Saint’s Blood, Sebastien de Castell has created an outstanding book that is a masterpiece in storytelling and modern fantasy’.

18 thoughts on “Book Haul: The Irregular by H. B. Lyle and Tyrant’s Throne by Sebastien de Castell”