Welcome to 200 Words or Less, a weekly Friday feature (when I can remember or be bothered to post) here on The Tattooed Book Geek where I will bring to you reviews/thoughts of 200 words or less from the books I read before I started blogging. We all have them, books that we read and loved or even read and hated before we decided to start blogging and what better way than a quick fire review of 200 words or less to share your thoughts on them. 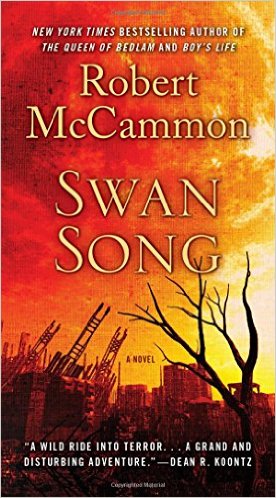 In a wasteland born of rage and fear, populated by monstrous creatures and marauding armies, earth’s last survivors have been drawn into the final battle between good and evil, that will decide the fate of humanity: Sister, who discovers a strange and transformative glass artifact in the destroyed Manhattan streets; Joshua Hutchins, the pro wrestler who takes refuge from the nuclear fallout at a Nebraska gas station; and Swan, a young girl possessing special powers, who travels alongside Josh to a Missouri town where healing and recovery can begin with Swan’s gifts. But the ancient force behind earth’s devastation is scouring the walking wounded for recruits for its relentless army, beginning with Swan herself.

Swan Song has a character called Joshua Hutchins, who before the apocalypse is a professional wrestler called Black Frankenstein, how cool, enough said!!!!

After a nuclear apocalypse devastates the world, us humans do love us some bombs! Swan Song follows various groups of survivors in the aftermath as they struggle to endure, surviving and journeying onwards. It has a good vs evil vibe with some supernatural aspects. But, it is so much more, it’s an epic and character driven story.

The separate story-lines are all interesting as are the eclectic mix of characters and their individual back-stories. Swan, Joshua and Sister are all characters that you really care about as you follow them. And, Roland is a character you love to hate, an annoying twerp, he is Joffrey before GRRM thought of him.

McCammon has an easy and engaging fast paced writing style that makes Swan Song fly by and it’s 956 page length feels like half that.

If anyone tells you that this is a poor man’s version of The Stand, it’s NOT. Yes, there are similarities but Swan Song sits firmly next to The Stand as a classic post-apocalyptic adventure and deserves to be read.

“Even the most worthless thing in the world can be beautiful, it just takes the right touch”

“and as she’d watched him stagger away Swan had realized that forgiveness crippled evil, drew the poison from it like lancing a boil.”

“Once upon a time, man had a love affair with fire.”

11 thoughts on “200 Words or Less: Swan Song by Robert McCammon”