Today on The Tattooed Book Geek I have the privilege of being on the blog tour for Lost Boy by Christina Henry (released July 4th by Titan books) and bringing to you all an excerpt from the book!

It was Peter, his words like frost on the air. I’d half-forgotten he was on his way, likely delayed on the path by Nip and his injuries. Peter’s green, green eyes burned in the moonlight.

Most of the other boys stood silently behind him, their faces unsure. Everyone’s expression said they were glad the Many-Eyed was dead, but Peter quite obviously was not glad and so they didn’t know how to feel about this.

“It attacked Harry,” I said, feeling angry and slightly ashamed, and then angrier because I thought I shouldn’t have to feel sorry about the Many-Eyed. “I thought it was going to kill him.”

“It did kill him,” Peter said.

His tone said this was of no consequence to him whatsoever. I closed my eyes for a moment so I wouldn’t scream at him in front of all the other boys.

“You should have left and taken the rest of the boys with you while it ate him,” Peter continued.

“Why, so it could follow us and eat the rest when it realized just how delicious we are? Peter, it was calling the rest of them. They would have swarmed all over this place.”

“Now they are going to swarm all over,” Peter said. “Because of what you did they will follow us into the forest and hunt us until we are all dead, and that will be the end of Peter and his boys.”

He was making me feel more foolish and embarrassed with every word. This was the first time any of us had killed a Many-Eyed, though we had fought them before and the monsters had eaten their fair share of boys over the years. I’d never understood why Peter only let us wound them, or why he would never explain.

“Why?” I shouted, unable to restrain my temper before the boys. I kept hearing Harry’s scream fading away, the last breath leaving his body. “Why are they allowed to take as many of us as they like but we’re not permitted to do the same for them? They should have been burned out years ago. We should have scorched the plains and chased the rest of them to the sea. We should never have let monsters stay on this island.”

“They’ve been here as long as I have,” Peter hissed. “We had a treaty! And you, you fool, you broke it and now they’ll come for all of us.” 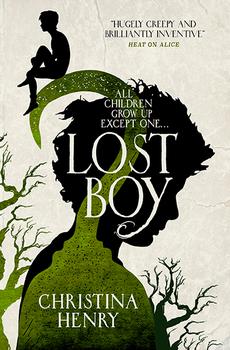 There is one version of my story that everyone knows. And then there is the truth. Once I loved a boy called Peter Pan.

Peter brought me to his island because there were no rules and no grownups to make us mind. He brought boys from the Other Place to join in the fun, but Peter’s idea of fun is sharper than a pirate’s sword. He wants always to be that shining sun that we all revolve around. He’ll do anything to be that sun. Peter promised we would all be young and happy forever.

Peter will say I’m a villain, that I wronged him, that I never was his friend.

CHRISTINA HENRY  is the author of the CHRONICLES OF ALICE duology, ALICE and RED QUEEN, a dark and twisted take on Alice’s Adventures in Wonderland, as well as LOST BOY: THE TRUE STORY OF CAPTAIN HOOK, an origin story of Captain Hook from Peter Pan.

She enjoys running long distances, reading anything she can get her hands on and watching movies with samurai, zombies and/or subtitles in her spare time. She lives in Chicago with her husband and son.