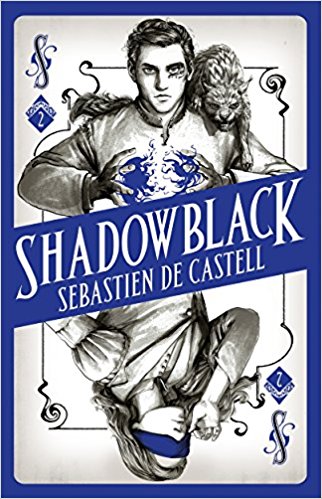 It’s a few months since Kellen left the Jan’Tep people. Now aged sixteen, Kellen is an outlaw, relying on his wits to keep him alive in the land of the Seven Sands. He misses home, he misses family and more than anything, he misses Nephenia, who he once loved.

Then he meets Seneira, a blindfolded girl who isn’t blind, and who carries a secret that’s all too familiar to Kellen. Kellen and Ferius resolve to help – but the stakes are far higher than they realise. A Shadowblack plague is taking hold – and Kellen can’t help but suspect his own people may be behind it.

I won a copy of this book through Readers First.

Even though The Greatcoats by Sebastien de Castell is one of my favourite fantasy series I have to admit that I haven’t read the first book in his YA fantasy series the Spellslinger series. You all know how it is, too many books and sadly, never enough time to read them all and ultimately some will end up passing you by.😢

I was, however, easily able to pick up and follow the story in Shadowblack without any prior knowledge so it’s all good. Granted, I only got to know the bare bones of the previous book but it was enough, you learn more as you progress through the book and quite frankly, it didn’t detract from my overall enjoyment of Shadowblack at all.👌

Kellen of the House of Ke is a sixteen-year-old outcast, an outlaw spellslinger from Jan’Tep on the run who also happens to have the ‘shadowblack‘ – (the shadowblack is a dangerous magical plague that is easily recognisable by the swirling black design around the left eye. That will in time cause the inflicted to descend into madness).

What’s a spellslinger you might ask! Well, let me tell you! A spellslinger is a derogatory term used by the people of Jan’Tep and means that Kellen doesn’t have much magic (the six different forms of magic are Iron, ember, breath, blood, sand and silk. Kellen, due to having the shadowblack has been permanently counter-banded which means he is unable to ever use five out of the six forms of magic. The only one available to him is breath and he only knows a couple of different variations of one singular spell) and has to resort to his own wits, guile and a variety of other tricks to supplement his meagre magical ability and to help stay alive.

His two companions are Reichis, a two-foot-tall nekhek (squirrel cat) think Rocket from Guardians of the Galaxy only far more murderous with an even worse attitude and his favourite food just so happens to be that delicious delicacy human eyeballs, nom nom nom! Actually, with Reichis bad attitude and my love for the classic 1980’s show The A-Team I think he should be referred to as Bosco “B. A.” Bareichis!😂 And, Ferius Parfax, a red-headed Argosi card wielding (think of a female version of Gambit from the X-Men) wanderer and gambler.

After the initial action-packed opening featuring Kellen, Reichis and Ferius the addition of Seneira who is accompanied by Rosie (another Argosi) really opens up the story (which is a great story) in Shadowblack and is the catalyst that allows the plot to start unravelling and the mystery and adventure to really begin.

I liked Seneira as a character and I enjoyed learning more about the wanderers that are the Argosi too. The addition of Rosie by de Castell worked well and she was a good counterpoint to Ferius helping show the differences between the various paths that the Argosi choose and then spend their life following.

Kellen, as the main character and narrator can at times be quite naive, doesn’t really know his place, who he wants to be or even where he fits in but during Shadowblack he goes through some self-discovery, coming to learn more about himself and by the ending, he has matured and has a far greater understanding of who he is.

The story in Shadowblack is definitely Kellen’s. But for me (whilst I liked Ferius as both a character and a companion for Kellen) the star of the book is definitely Reichis who is an outstanding character, shining everytime he’s on the page. The banter between him and Kellen is topnotch and I also found Reichis to be the perfect comic relief as at times Shadowblack can be quite dark in tone. Whenever Reichis goes hunting he doesn’t refer to it as ‘hunting‘ oh no! Reichis goes ‘murdering‘ and really, that tells you all you need to know about him. He’s just a fantastic creation who thinks he’s the mack daddy of everything!

The setting for Shadowblack is the Seven Sands, an outback, frontier type region that gives of a western vibe to it and it’s pretty cool.

While the ‘big bad‘ behind the overall scheme in Shadowblack remain largely unknown (until the end). There’s a decent bad guy to act as the foil against Kellen, Reichis and Ferius throughout the course of the book who uses sinister and menacing means to enact their plan.

Castell is a superb writer who knows how to tell a story. Shadowblack is easy to read, decently paced, gives you twists and turns aplenty in the story to keep you engaged and characters that you care about too. The back of the book states ‘sorcery is a scam‘ but Shadowblack dear readers is the real deal.👌 As a writer, de Castell is also a dab hand at incorporating both the deeper moments of emotion and the lighter moments of humour into his books and you will often find yourself smiling throughout the course of Shadowblack.

I stay away from the YA genre, I’m not discriminating, it’s just not for me. I like my fantasy to be far more on the grittier, bloodier, grimmer and darker side with flawed amoral protagonists rather than the standard light v dark and good guys v bad guys. Nevertheless, I thoroughly enjoyed Shadowblack and feel that it transcends its YA fantasy label to something that fans of both YA and adult fantasy will enjoy as there’s truly a lot to like in de Castell’s creation.

I found Shadowblack to be a fantastic fantasy western hybrid and a rousing adventure. I am definitely looking forward to continuing the story in the next book.

Oh, read and buy de Castell’s The Greatcoats series too! It’s finished, exceptional and I highly recommend it!👌