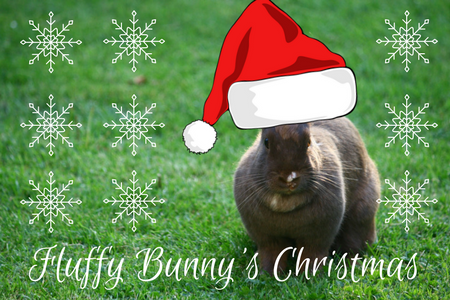 For those who are Scrooge and want Christmas to be hated,

Have a read of this, it’s fucking funny and plenty x-rated,

Chilling, he was having a toke,

That poor rabbit had run out of wonga,

Spending all of his on women to munch on his chimichanga,

Tis the season of sharing, of goodwill,

Fluffy liked nothing more than giving everyone a merry thrill,

Fluffy had an idea,

In his mind it was clear,

He’d dress up as Mr Delivers all night, as Santa,

Charm the ladies with his witty banter,

Being merry and jolly,

A glorious way to make himself some extra lolly,

Knowing there won’t be any no no no’s,

Soon those yummy Mummy’s would be screaming oh-oh-oh!

Fluffy was singing along to Jingle Bell’s,

The thought of his honey’s making his candy cane swell,

Everyone was welcome, be they naughty or nice,

To get a surprise from Santa’s huge sack,

Fluffy will take you for a ride in his sleigh,

Some alone time, a chance to have his wicked way,

It doesn’t take much to make this rabbit hard,

Fluffy is a fan of 80’s classic rock,

Ask him nicely he’ll let you suck his…….😱

Like the Alice Cooper lyric “you’re poison running through my veins”,

After a night with Fluffy, you’ll never be the same,

As Heart sang “how do I get you alone”,

Fluffy will spread you like jam on a scone,

You might think Fluffy is trying to be offending,

Fluffy just loves to give himself a happy ending,

Regardless of colour, faith and creed,

Fluffy shares his salty nuts, let’s you crunch his seed,

The moral of the story is clear,

To make you smile his only reason,

To wish you all well this festive holiday season.