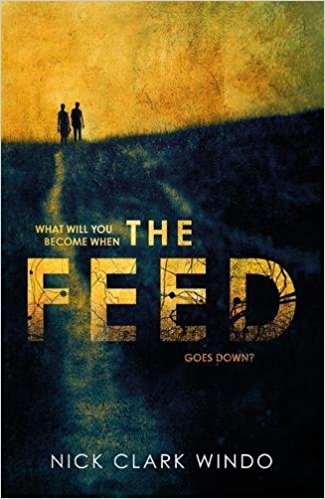 Tom and Kate’s daughter turns six tomorrow, and they have to tell her about sleep.
If you sleep unwatched, you could be Taken. If you are Taken, then watching won’t save you.
Nothing saves you.

Your knowledge. Your memories. Your dreams.
If all you are is on the Feed, what will you become when the Feed goes down?

For Tom and Kate, in the six years since the world collapsed, every day has been a fight for survival. And when their daughter, Bea, goes missing, they will question whether they can even trust each other anymore.

The threat is closer than they realise…

I received a free copy of this book courtesy of the publisher in exchange for an honest review. I’d also like to thank Anne Cater for asking me to be part of the blog tour for The Feed.

The Feed starts with a prologue set before the collapse and focuses on Tom and Kate, the two main characters. Tom and Kate are going ‘slow‘ completely disconnected from the Feed, talking in the real, which doesn’t happen when you are connected to the Feed as it is that immersive, your whole life plugged in to and controlled by the Feed. It’s an innocuous beginning with Tom and Kate who are a married couple and who are just trying to spend some quality time together. Until the Feed is hacked and then something catastrophic happens that sets in motion the collapse of the Feed and subsequently, society on a whole.

After the prologue, we jump forward 6 years and it’s about survival and coping in the aftermath of the collapse. Kate and Tom, their child, Bea, Graham and Jane who never had the Feed (they were resistors), Sean, Jack (Sean’s son) and Danny make up the group at the beginning. It’s a small community akin to a farming community, foraging, trying to grow crops and generally, keeping a low profile and getting by in the best way that they can. With the loss of knowledge and machinery, the way of life and living has reverted back to a more basic level. Food and resources are dwindling and it’s a daily struggle to survive.

The Feed was all-encompassing and then it was gone, it was like an addiction, constantly streaming everything, all the time and now 6 years later, after it’s gone, people still suffer from Feed reflexes. When they try to remember things they inadvertently try to access memories, strands and streams from the Feed and they can’t, there’s nothing there, just an empty void and this causes them to start fitting, withdrawal symptoms from Feed addiction. At the start of the collapse, Feed reflexes were the cause of most people’s deaths as they couldn’t connect to the Feed. Where before they had a whole virtual world there was now nothing, they became lost in an oblivion of emptiness, the Feed reflexes took over as the synapses tried to connect over and over and over failing each time and they just didn’t know how to function like people in the real world.

Sleep is the major danger for our cast of characters and you have to be watched by someone else when you sleep in case you are taken. Being ‘taken‘ means that your body is taken over and is the main factor that helped bring about the collapse of the Feed network and society. It happens quickly, in a matter of seconds, you start twitching in your sleep and then you are no longer you. You will look and sound the same but the person inside won’t be you, another will be tethered to you, your memories, what makes you, you, all gone and replaced with someone else. You have to be watched while you sleep otherwise how would the people around you know that when you awake, you are still you, they wouldn’t and then, they wouldn’t be able to trust you. There is no cure or remedy to being taken and the only solution is to kill the taken person before they become a danger and a threat.

Everything was on the Feed, everything that made you, you. Your thoughts, your feelings, your emotions, your memories and you could even back-up your brain. The Feed took over from reality, you didn’t need to learn anything in the real world as you had the virtual world at the tip of your fingers. You could access the required information on the Feed in the blink of an eye, as soon as you thought it, the information that you wanted would be there right before you. Due to this, when the Feed went down a vast swathe of irreplaceable knowledge and information was lost.

The first part of the Feed is quite slow, there’s a couple of action-orientated moments but on the whole, the beginning is rather sedated and measured and it takes over a hundred pages for Bea to finally be abducted. The slower pacing feels right for that first part of the story though and it works extremely well. It’s measured but at the same time engaging and it gives Windo the chance to ramp up the tension, explain the danger of sleep and being taken, build the world and allow you, as the reader a chance to become acquainted with the characters that he has created.

After Bea has been abducted the pacing picks up. There’s lots of walking in the Feed, the book is a journey as Tom and Kate search for Bea. It’s a journey filled with twists, turns and revelations. Some you will see coming and others will blindside you.

There’s only so much that you can do with a post-apocalyptic setting, after all, it’s a world gone to ruin. But, in The Feed, Windo has created an atmospheric, desolate and brutal world. The remnants of the past are vividly realised, it’s a bleak, barren and dangerous post-feed world that the characters now inhabit and it comes alive thanks to Windo’s descriptive prose. The imagery and the way that the world and the various landscapes are described by Windo, the overgrown flora, lush vegetation, small settlements, dilapidated and crumbling buildings and the destroyed cityscape reminded me of The Last of Us video game (it’s a fantastic game, one of the best from the last generation so, if you’re not a gamer, please know, it’s a great comparison for me to make).

The idea and premise behind the Feed are really interesting and it does make you think about and question our reliance, no matter how small on social media and our own personal feeds (anyone on Twitter, Facebook or any other social media already has a feed) in today’s digital age. As technology continues to advance you can predict that our dependence on both it and the required connectivity will only continue to grow as it spreads into every facet of our daily lives and due to this, I found the concept of the Feed to be very plausible for our future.

I mentioned earlier in the review about being ‘taken‘ while you sleep. I’m not going to go into any overt detail and spoil the story but the introduction of Sylene as a character later in the book works really well as the catalyst to learn more about where the taken come from. When the reveal happens and the truth behind who is responsible for ‘taking‘ people is finally revealed you can understand the motivation and the reason why and it adds a whole extra dimension to the story being told.

The Feed doesn’t feature a vast ensemble cast of characters and the main focus is on Tom, Kate and later on, Sylene too. There are a few secondary characters added to the mix too who all, no matter how briefly they appear have a role to play, are well developed and more importantly they add something to the overall story.

When you have a book that is about surviving whatever life throws at you and enduring hardship, you need to feel something for the characters involved. You also need to factor in that Tom and Kate are parents searching for their abducted child and if you feel nothing for them then you won’t care about the outcome, you won’t care if one of them is taken, you won’t care if they find Bea and you won’t care if one or both of them dies. Luckily, Windo makes you care about Tom and Kate and they aren’t just names on a page, their grief is believable, you want them to overcome the obstacles and predicaments that they find themselves in on the search and more than anything you will find yourself willing them along on their journey as you want them to find Bea.

I really thought that the ending of The Feed was outstanding. Sometimes books just seem to fizzle out as though the author doesn’t know how to end their work. There’s no such issue like that with The Feed and while it’s only my personal opinion, I found the ending to be everything I could have asked for and more. It’s the type of conclusion where you turn the final page, put the book down and think to yourself ‘damn, I wasn’t expecting that but damn, that was good‘.

The Feed is a top draw and addictive read that deserves to be a hit. It’s a harrowing tale, at times moving, at times thoughtful and at times harsh. It will keep you coming back for more with characters that feel real and whose fate you care about, a vivid landscape and stellar thought-provoking story it is a compelling page-turner.

The Feed is a welcome and worthy addition to the genre and anyone that enjoys post-apocalyptic fiction will find a lot to like in Windo’s accomplished debut work.

Simply put, I loved this book.

Nick Clark Windo studied English Literature at Cambridge University and acting at RADA. As well as writing, he works as a film producer and communications coach. He lives in London with his wife and daughter. The Feed is his first novel.

Nick Clark Windo can be found: