Welcome to one of the most pointless debates possible! A rivalry for the ages, that generations-old feud between electronic and print, the Monday night wars for books!

Which is better, the e-book or the print book?! You really would think that in the grand scheme of things that it wouldn’t matter wouldn’t you and the fact that people are reading should be all that matters?!

But no! The greatest minds of our time and the philosophers of old have debated and ultimately failed to decipher why something so trivial is of the utmost importance!

The Queen, when I asked the Queen she was going to answer but got sidetracked and all I got from her was “The Queen decrees oooooohhhhh Jeremy Kyle is about to start. One does like to see the lower class chavs on TV, what with all the drama they make us royals look respectable“.😂

The Rock, well, The Rock simply said: “it doesn’t matter“.

And, finally, The Donald! Mr Cat on his head himself the President of the United States of America weighed in on the subject. His response “mine is bigger and it works“.

Well! I’m scared and hoping that he was paraphrasing his recent nuclear button comments and that he meant his e-reader storage space. Just imagine if he meant something else! Watch out ladies “it’s bigger and it works” could be referring to his presidential flagpole and he could be telling you that The Donald’s dong is bigger than Kim Jong’s ding!😂 Ding dong! Ooohhh euphemism!😂

Unlike the hymn, he can’t have the whole world in his hands but with an e-reader, YOU can have the whole library of your books in the palm of YOUR hand.

C’mon, I bet you didn’t expect to see hymn lyrics in the post or on my blog!😂

Now, before we continue with the post let us pray……

……Bwahahahaha!😂 Prayer, never, I’m too close to Satan and hell to pray it’d be like cheating!😂

A single print book takes up more room than an e-reader and that’s just one book. If space is at a premium for you then an e-reader is ideal! This is one instance where smaller is better! Ooohhh euphemism!😂

Imagine how much room you need for a vast amount of books! You’ll end up with piles and piles everywhere!

There are near limitless books available at the click of a button. If you buy a print book you either have to order it online and then wait for it to be delivered or go outside and purchase it yourself (there are people outside, shudders). An e-book as soon as you have clicked purchase is downloaded and ready to go, its instantaneous with no waiting and no people.

They are good for the environment and a whole forest of trees doesn’t need to be felled for your reading pleasure.

Hhhmm……I wonder if for books like the 50 Shades series whether they used bushes instead of trees?! Ooohhh euphemism!😉

If you are getting on in years, at times struggle to read the print and don’t want to admit that you might need reading glasses then with an e-reader you can just enlarge the font and pretend like it’s all good.

They could be a secret and deadly plot by Skynet to get teeny tiny killing robot terminators inside our homes!

If you have a faulty e-reader charger then it could overheat and start a fire. Subsequently, burning down your house and destroying your precious print book collection!

That previous point could even be Skynet and it would be the first strike in their plot to eradicate humanity. Or, perhaps simply the e-reader could have started the fire by itself as it is sentient, self-aware and was jealous of the print books you own! Ya know, it saw you looking longingly at the cover and stroking it and it wanted to be stroked too! Ooohhh euphemism!😂

The battery could run out at the most inappropriate time! Major plot twist about to be revealed or a characters fate in the balance and suddenly the screen goes blank! The horror!

Just like with all modern technology, e-readers are advancing and new and improved versions are constantly appearing to be sold to the marauding masses. If you want to keep up with the cool kids and have the newest and latest one then you need to pony up the dosh on top of the cost of the books you are already buying!

A nice big and heavy hardback make for an ideal weapon!

Ladies or gentleman if you have a hardback in your handbag, purse or man bag and are attacked then wallop! A bag containing a heavy hardback just like a brick could incapacitate the attacker with plenty of damage to the attacker and none/minimal damage to the book.

Likewise, if an intruder breaks into your home and you don’t have a weapon in easy reach (knife, gun, baseball bat, cricket bat, sledgehammer) but you have a hardback near then again it is wallop! The thief is felled!

Another plus! In either case, you’d also be able to read the book whilst waiting for the police to arrive and arrest the perpetrator.

If you run out of toilet paper and are desperate then well……I’m just saying that print books are paper. In the unfortunate circumstance that you desperately need to wipe if you have a book that you didn’t enjoy then it could act as a substitute and it would be problem solved!😂🚽 That’s called thinking outside the box people though, I’d suggest keeping it inside the bowl if you don’t want to make a mess!😂

Sometimes you need tissues. You might have a cold and a runny nose or perhaps you require one for something more ahem, private and alone! If you’ve run out of tissues and you have snot streaming down your nose then with a book to hand you could rip out a page and blow. Especially if you don’t want to wipe it on your sleeve! Classy!😂

Same for that ‘secret and alone‘ need I alluded to. If you have a book to hand and no tissue then in a bind the book could work. Obviously, you can guess what would be in the other hand but as you love books you could try and sell it as you were merely expressing your love of books.

Unlike an e-reader that requires charging a print book is always ready 24/7/365 to satisfy your reading needs. Who knows, an e-reader might not be able to keep it up all night, a print book can! Ooohhh euphemism! 😉

You can accrue an awesome collection of books that look sweet.👌 An e-reader is just a small electrical device, nothing special but seeing a collection of fantastic covers and books well, you don’t get that with an e-reader. If you have lots of books then you can show off the collection and start with ‘look how big it is‘ – the book collection obviously people! Please keep your mind out of the gutter on my respectable blog!😂

There’s a myriad assortment of things that you can build with books! A book Christmas tree (not long now folks it’ll soon be Christmas 2018), a book chair, a book fort. It’s called being creative and using your imagination. You can’t do that with an e-reader.

If you are really lacking in imagination then you could always just build a wall out of books.😂

“All in all it’s just another book in the wall”

With print books, you can get signed copies of your favourite books to treasure and keep.

If something unfortunate happens involving water. Say, a water pipe bursts flooding your house or an elderly and forgetful relative starts running a bath, forgets about it, the bath overflows and the ceiling caves in sending soapy water gushing everywhere then you can use print books to try and soak up some of the water. Yes, sadly your books would be damaged beyond repair (which, of course, is a con) but they’d be sacrificed for the greater good and with the insurance payout you’d be able to get brand new copies anyway!👌

The smell! I know some of you are book sniffers and like to get high on that ‘new book‘ aroma. Well, if you had an e-reader then you couldn’t, you’d be jonesing for a fix, suffer withdrawal symptoms and could end up do something crazy!

If there was an apocalypse, possibly zombie, possibly not with print books you would still be able to read! Power and electricity will be scarce or unavailable and if there is still power it would be conserved for necessities and not frivolous uses like charging e-readers ergo after their current charge had run out in the lawless wastes of the apocalypse they would just be a pile of useless old discarded tech.

Trees! You have to chop down trees to make books! Ya know, saving the environment and all that jazz.

Similar to chopping down trees. Trees could be sentient and that would make us murderers! Think about it, I’m sure you’ve read or seen Lord of the Rings?!?! The trees, well, the Ents come to life! Walking, talking and strutting their stuff waving their wood and mighty trunk around! Ooohhh euphemism!😂

What if the trees on Earth are merely biding their time, lying dormant and waiting the right moment to strike?!

That would mean that they are alive and ergo, we would, in fact, be killing them. Murder people, all you holier than thou ‘I shall not sin‘ brigade it’s murder oh and you’ve already sinned anyway as stating that you don’t sin is being prideful and pride is one of the seven sins! Not just one or two little trees either but masses upon masses of them, it’s tree genocide or if you will allow me to butcher the English language like you butcher trees, treeocide! 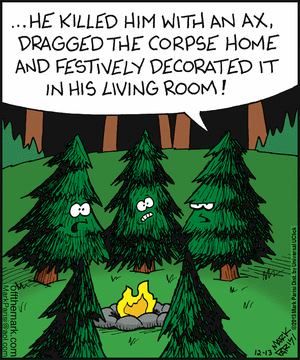 What about Baby Groot?!? Baby Groot is a tree! Would you really be prepared to kill baby Groot just so that you could get a new book?!

Well! This certainly devolved into nonsense, didn’t it! I had every intention of making it a serious post but ya know, the best-laid plans of mice and men!😂

Oh well, never mind. If you wanted a serious discussion on this topic it’s best that you check out other blogs.

There are pros and cons to each and it really is a personal preference over which you prefer. No right or wrong just your own choice. For me, I’m team print book though as I don’t play well with others and I’m not really part of any team I’ll go with I’m team immature nonsense post for the win!😂