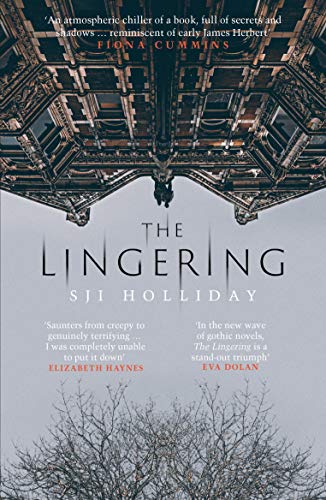 Married couple Jack and Ali Gardiner move to a self-sufficient commune in the English Fens, desperate for fresh start. The local village is known for the witches who once resided there and Rosalind House, where the commune has been established, is a former psychiatric home, with a disturbing history.

When Jack and Ali arrive, a chain of unexpected and unexplained events is set off, and it becomes clear that they are not all that they seem. As the residents become twitchy, and the villagers suspicious, events from the past come back to haunt them, and someone is seeking retribution…

I think that the tagline for The Lingering should be as follows:

Jack and Ali Gardiner (a policeman and a psychiatric nurse) have sold most of their worldly possessions, trading in the city life and their stressful jobs for a fresh start. Starting over away from it all in the Fens at Rosalind House. Taking their places in The Rosalind House Community Project which is a self-sufficient commune (formed in 1995 by Smeaton Dunsmore) where the goal is to ‘bring in the light‘ embracing peace and living in freedom.

Within the commune, there is limited interaction with the outside world. Things like mobile phones, the Internet, TV and radio, excessive drinking, driving, swearing (the absolute horror) and visiting the local village aren’t outright banned but they are frowned upon and members are urged to renounce their usage and let go of all outside influences.

The commune itself is only small in number with eleven current members including the founder, Smeaton and ‘Fairy‘ Angela. Angela is a ghost hunter, a quirky and odd sort who just wants a place to belong. After spending time in the nearby village before moving to the commune she is also knowledgeable on the area and the history of Rosalind House and sees it as the ideal place to prove the existence of ghosts.

From the start, it is obvious that Ali and Jack are hiding something and that they aren’t simply escaping the daily grind and the rat race for a more measured and natural way of life. Out of the couple, Ali seems to be the one that is in charge and it was her idea to move to Rosalind House with Jack following her lead.

At first, the pair seems to have trouble settling in but it is put down to the remote and quiet country location that is far removed from the hustle and bustle of the city where they came from and the changes to their everyday lives. Even though he was initially sceptical Jack adapts to life in the commune seeming to find his place, helping out with various jobs and coming into himself. Ali, on the other hand, struggles to find her own place, remaining abrupt and unsociable with the other members. Shunning Angela’s attempts at friendship, constantly seeming on edge and fraying at the seams after experiencing strange disturbances from her first day at Rosalind House.

The other members are unsure about Jack and Ali. The pair managed to bypass the usual process for joining by offering cash to Smeaton who accepted to pay for work to help fix parts of the dilapidated old building. The commune isn’t for everyone but it’s more than that. There’s something off about the couple and their arrival seems to have shifted the balance, awakening something that had laid dormant in the house.

With The Lingering Holliday has created the type of book that has a gnawing sense of foreboding throughout its length. A simmering tension that lingers alongside as you read and that creeps under your skin. With more and more ghostly and strange occurrences happening things finally come to a head when Jack and Ali’s secret is discovered and the truth about them slowly becomes apparent.

The Lingering is told mainly from the perspectives of Ali and Angela with the sporadic chapter included by Smeaton. Both Ali and Smeaton’s chapters are written in the third person perspective whilst Angela’s is written in the first person perspective. As the story progresses Holliday allows us the chance to get to know her characters and regardless of whether it’s in first person or third person her characters are fully-fleshed and feel real.

Rosalind House is steeped in a disturbing history (if only walls could talk) and The Lingering is a story where the setting is just as important as the characters. In the capable and evocative hands of Holliday Rosalind House and its grounds come alive and feel like a living and breathing atmospheric entity. A grand family house with ties to witchcraft and witches that was burnt to the ground in the seventeenth century and that up until the mid-nineteenth century when an asylum was built on the grounds had been abandoned. The asylum was then turned into a psychiatric hospital in the 1940’s and remained empty from its closure until Smeaton purchased the property for his commune in 1995.

Along with the present day story, there are excerpts that are interspersed from the journal of Dr Henry Baldock who worked at Rosalind House back when it was a psychiatric hospital in 1955 focusing on his investigating allegations of abuse, the use of outdated and barbaric practices and mistreatment towards the patients. These journal entries (which I loved) are used to add additional insight and history to Rosalind House and as the bridge between the present storyline and the events from the past, helping to tie it all together and they are absolutely fascinating to read.

To go along with the haunted house and thriller elements in The Lingering there is an additional focus on coercion and control within the story too. Looking at how a person can be controlled and how easily they can be influenced into doing something another person wants through manipulation and mind games. And, how far can that person push the other before they break (or will they eventually say no) when what they are asking of them is wrong and goes against their nature. Evil has many faces and it can manifest in many different guises appearing in seemingly the most innocuous, normal and ordinary type of person. The Lingering features one such person and allows you a glimpse into their clever, controlling and depraved mind.

Clocking in at just over 250 pages The Lingering is only a short book and it left me torn! I was torn between either devouring the book and flying through the pages or reading it slowly over a number of days and savouring it. In the end, gripped by the story, wanting to know what happens next, lacking in willpower and thanks to a couple of holy shit shocks and twists I said fuck it and flew through the pages of what is a delectably dark tale.

Part haunted house ghost story, part psychological thriller and all dark with an air of mystery that pervades the pages The Lingering is a scintillating read that will chill you.

Purchase The Lingering out now in ebook and available November 15th in paperback.