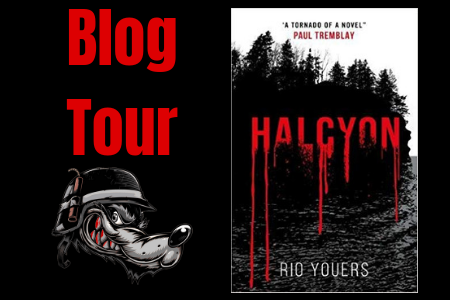 Today on The Tattooed Book Geek I am pleased to betaking part in the blog tour for Halcyon by Rio Youers with an excerpt from the book.

My thanks to Phillipa Ward for the tour invite, Titan Books and Rio Youers.

Halcyon is the answer for anyone who wants to escape, but paradise isn’t what it seems.

A self-sustaining community on a breathtakingly beautiful island, Halcyon is run for people who want to live without fear, crime or greed. Its leader has dedicated her life to the pursuit of Glam Moon, a place of eternal beauty and healing, and believes the pathway there can only be found at the end of pleasure.

On the heels of tragedy, Martin Lovegrove moves his family to Halcyon. A couple of months, he tells himself, to retreat from the chaos and grind. Yet he soon begins to suspect there is something beneath Halcyon s perfect veneer. As the founder captivates his young family, Martin sets out to discover the truth of the island, however terrible it might be, where something so perfect hides unimaginable darkness beneath…

Martin didn’t run anymore. A wobbly jog was the best he could manage—wobbly because the muscles he’d displayed in his twenties, and even into his thirties, had softened, and at forty-one he sported what the magazines kindly called a dad-bod. He didn’t put this down to being a busy family man, or to working fifty-plus hours a week, but to a torn ACL he’d suffered playing racquetball with his brother. He’d played football and basketball through high school, and amateur league baseball for most of his adult life, all without injury. But five minutes on a racquetball court with Jimmy (three years older, thirty pounds heavier) and he felt his left knee go pop. The operation to repair it was straightforward enough, but his work insurance plan didn’t cover sporting injuries . . . and even if he could afford to pay for it himself, it wasn’t like he had time to go under the knife.

He took the stairs quickly, though, and with his heart clamoring. As he rounded the newel post, he felt the injury re a warning shot, and managed only three more lumbering steps before his knee gave out. He slumped against the wall—“Ah, fuck!”—and limped the rest of the way to Edith’s room. Shirley’s words accompanied him. She’s screaming inside. Martin had no idea what he’d find when he opened Edith’s door. There was no way Shirley could know what was happening to her sister, but the whole seizure thing was undeniably eerie.

She spooked you, is all, he thought, grasping the doorknob and pushing the door open. There’ll be a solid explanation for this. They were probably watching the same—

The thought broke. It didn’t fade or even simply end. It broke, and with a tiny shattering sound, like someone stepping on a microscope slide.

Another night terror, certainly, but not like any he’d seen before. Deeper, was the word that came to mind. Edith stood in the middle of the room, her face a cracked oval, a thread of drool hanging from her lip. She looked at Martin. Her eyes caught the light like sparking flints.

Martin stumbled toward her, meaning to scoop her into his arms and cradle her until the storm had passed and she was dreaming sweetly. The shock in her expression knocked him back a step, though. Whatever was making her scream inside . . . she wasn’t just seeing it, she was living it.

She clutched a blue marker in her right hand and used it to point at the wall, where the posters had been removed and she’d drawn a series of symbols. They were esoteric, nonsensical, though apparently not without meaning.

“ The whoop-whoop,” Edith said, pointing to a diamond with sunrays shooting from it. The marker toppled from her hand. “It all went boom, Daddy.”

He swept toward Edith and lifted her into his arms.

Effortless, with her being so delicate. The muscles across his chest barely flexed. His injured knee reacted otherwise, buckling under him, spilling him to the floor. He never let go of Edith, though, and she looked at him through ribbons of dark blond hair, her mouth a wavering circle, one hand reaching, not to touch his face, as he thought, but to point at another symbol on the wall behind him, this a broken swirl, and she whispered in the frailest, sweetest voice imaginable:

“ The man with no hands is crying.” 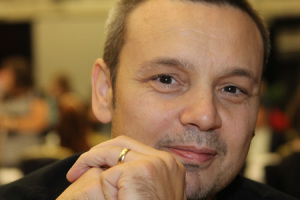 Rio Youers is the British Fantasy Award–nominated author of Old Man Scratch and Point Hollow. His short fiction has been published in many notable anthologies, and his novel, Westlake Soul, was nominated for Canada’s prestigious Sunburst Award. He has been favorably reviewed in such venues as Publishers Weekly, Booklist, and The National Post. His latest novel, The Forgotten Girl, was released by Macmillan/St. Martin’s Press in June 2017.

Rio lives in southwestern Ontario with his wife, Emily, and their children, Lily and Charlie.