Today on The Tattooed Book Geek I am pleased to be taking part in the blog tour for The Nightmare Girl by Jonathan Janz.

My thanks to Anne Cater for the tour invite, Flame Tree Press and Jonathan Janz. 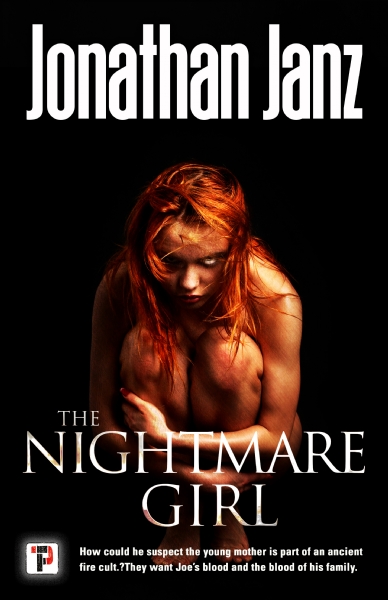 When family man Joe Crawford confronts a young mother abusing her toddler, he has no idea of the chain reaction he’s setting in motion. How could he suspect the young mother is part of an ancient fire cult, a sinister group of killers that will destroy anyone who threatens one of its members? When the little boy is placed in a foster home, the fanatics begin their mission of terror.

Soon the cult leaders will summon their deadliest hunters―and a ferocious supernatural evil―to make Joe pay for what he’s done. They want Joe’s blood and the blood of his family. And they want their child back.

Excerpt from The Nightmare Girl.

“If I didn’t know you better,” Joe said, “I’d think you were calling me out.”

Michelle wouldn’t look at him. “It’s not calling you out, honey. It’s constructive criticism.”

Michelle did glance at him then, a finger to her lips to warn him off rousing Lily.

“It’d take a sonic boom to wake her up,” Joe said, but he threw a look in the rearview just to make sure. Their two-year-old daughter was conked, her mouth open and her face turned sideways, a spill of long black hair tumbling down her cheek.

“You’re the one brought it up.”

She sighed. “Well, it was frustrating, Joe. Aren’t I allowed to feel frustrated?”

He willed his voice to stay even, but it took an effort. “You don’t think I’m mad about it, honey? Maybe I should shout some cuss words, smash a few beer bottles over my head so you know I’m agitated.”

“I wanted that contract more than anybody. I work for two months with a client and those Wilson jerkoffs come in at the last minute and undercut me?”

Some of Michelle’s angst seemed to dissipate. “I know you’re disappointed, dear.” She shook her head, tapped her fingers on her legs. “Maybe it’s the name.”

Joe felt the skin at his temples tighten. “It’s not the name.”

“And Azure Horizons is?”

She shrugged. “You have to admit Azure Horizons sounds more interesting than Joe Crawford Construction.”

She made a pained face. “The Wilson Brothers are no better at building houses than you are.”

“But this is the third time in as many months they’ve outbid you.”

“So lower your bids.”

He clenched his jaw, forced himself to pay attention to the road. They were nearing town, the Marathon gas station up there on the left. His eyes flicked to the fuel gauge. Nearly empty. They’d have to stop.

“I’ve explained this, honey,” he said, taking care to keep his tone low. They’d have to wake Lily when they got home, but it was usually best to let her sleep as long as possible. When she didn’t nap, she was more frightening than a terrorist on crystal meth. He went on. “If I put forth a lowball bid and the client accepts it, what happens when the project gets going and the costs start to rise?”

“You do what every other contractor does and raise the price.”

“I don’t do business that way.”

“You won’t do business at all unless you adapt.”

It hit him like a punch to the gut. Michelle was seldom this way to him, but he’d made the mistake of dreaming aloud of the new car he’d buy her once the contracts on this deal were signed. The ragged edge in her voice was her unvarnished disappointment talking. But that didn’t make it sit any easier.

She sighed. “Sorry for being selfish.”

“Are you?” he asked without looking at her. The gas station was a hundred yards up.

“I can be like everybody else and overcharge for materials and drag my feet to inflate my labor fee, but I’m not going to do that.” He signaled a left turn. The gas station looked busy. All the pumps but one were occupied. He said, “What you’re talking about, that’s dishonest. I tell people the price, and I try to steer clear of overages. If that makes me some kind of chump, then so be it.”

She smiled wanly. “It’s like I’m sitting here with my dad.”

Jonathan Janz is the author of more than a dozen novels and numerous short stories.

His work has been championed by authors like Joe R. Lansdale, Jack Ketchum, and Brian Keene; he has also been lauded by Publishers Weekly, the Library Journal, and the School Library Journal.

His novel Children of the Dark was chosen by Booklist as a Top Ten Horror Book of the Year.

Jonathan’s main interests are his wonderful wife and his three amazing children.

FLAME TREE PRESS is the new fiction imprint of Flame Tree Publishing. Launching in 2018 the list brings together brilliant new authors and the more established; the award winners, and exciting, original voices.