Today on The Tattooed Book geek I am pleased to be bringing to you all a book excerpt from Fountain Dead by Theresa Braun. 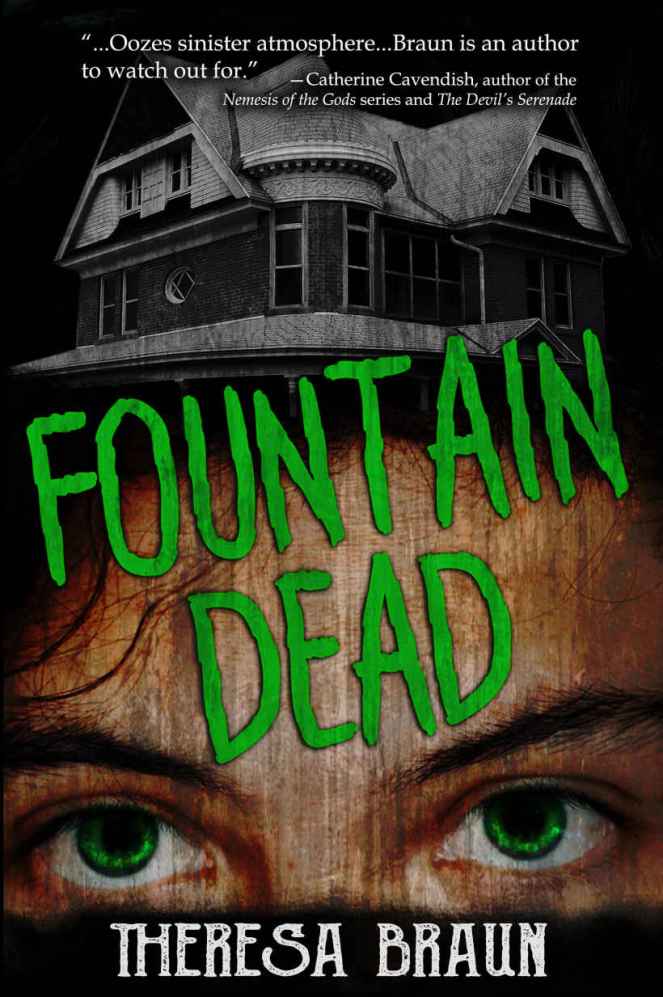 Mark is uprooted from his home and high school in the Twin Cities and forced to move with his family into a Victorian in Nowhere-ville. Busy with the relocation and fitting in, Mark’s parents don’t see what’s unfolding around them—the way rooms and left behind objects seem alive with a haunted past. Of course, Mark keeps his ghostly encounters to himself, all the while sinking deeper into the house’s dark, alluring, and ultimately terrifying history. As romantic entanglements intensify, the paranormal activity escalates. Past and present come together. Everything is connected—from the bricks in the walls to the hearts beating in their chests, all the secrets of Fountain Dead are finally unearthed. 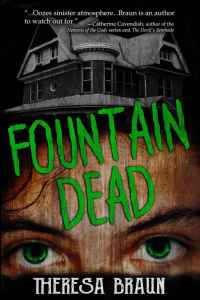 The vapor wafting from the stagnant pool smelled like the rancid rot from inside a carcass. Mark felt he breathed in fire. The gooey surface boiled and foamed as if a prehistoric substance. His heart stopped as something emerged. A goopy and gnarled dome became a sickly face. The eyelids still closed, the rest of the form rose, covered in green.

A tattered dress clung to the feminine curves. The cloth slipped from the shoulders, drawing his attention to her skin. The texture made him gag.

A sour taste of bile filled his mouth. His skin contracted as he contemplated her spongy flesh. Her black eyes sprang open like a demonic doll’s. Her inhuman gaze stabbed his very core, and he knew he was facing a soul-less being. The eyes burned like hot stove burners.

A decomposing hand extended toward his throat.

Mark woke, wet with perspiration. His pillowcase and sheets were damp, as if he’d taken a swim in the fountain. That idea made him unable to breathe. His heartbeat sped along at a rate close to heart attack status as he tried not to blow a gasket about the evil that lie in wait. He whipped his pillow from behind his head and squashed it to his chest. No one would grasp what he’d been feeling—or what he’d been seeing.

Something—a fiend, a spirit, the fountain—wanted to hurt him.

The devil on his shoulder advised him that his mother had to be right. All of the metal music, the cartoons, the swearing, had been an invitation for demons and darkness. Forget the fact that none of his friends had ever mentioned opening some gateway to hell. These dark forces had chosen him.

He lied back, exhaustion sinking him deeper into the mattress. After pulling the blood warm sheets up to his chin, he shunned the moonlight streaming into the room. The crooked claws of the branches squealed against the half-open windowpane. Summer’s hot breath puffed into the house. Mark didn’t have to strain to hear its griping—the sighs of the woodwork and the building’s various joints.

The door to the servants’ quarters was open again. However, that bothered him less and less. A perfume of fragrant flowers sent him to sleep.

“With all the fantastic flair of a classic haunted house tale but with a decidedly unique and terrifying sensibility, Fountain Dead is everything you can want in a ghost story… and so much more. A must-read for the fall season.” – Gwendolyn Kiste, author of The Rust Maidens and Pretty Marys All in a Row

“…Oozes sinister atmosphere… Braun is an author to watch out for.” – Catherine Cavendish, author of the Nemesis of the Gods series and The Devil’s Serenade

“Scary and intelligent, Braun’s story will creep under your skin as she deftly weaves the past and present together.” – Tom Deady, Bram Stoker Award winning author of Haven

Theresa Braun was born in St. Paul, Minnesota and has carried some of that hardiness with her to South Florida where she currently resides. An English teacher and adjunct college professor for over twenty years, she continues to share her enthusiasm for literary arts with her students. She earned a Masters in English literature with a thesis on Shakespeare’s Twelfth Night. In her spare time, she enjoys delving into her own creative writing, painting, photography and even ghost hunting. Spending time with her family and traveling as often possible are two of her passions. In fact, her world meanderings are often backdrops for her work. Striving to make the world a better place is something dear to her heart. When she’s not writing, she can be found looking for romance or shopping for antiques.