Today on The Tattooed Book Geek I am pleased to be welcoming John O’Bergh the author of The Shatter Point onto my blog for a really interesting guest post looking at music in the horror genre.

Guest Post: A Monster Wave of Music in Horror Fiction

Something interesting is happening with music and horror fiction. By my count, more stories that involve music or musicians have been published in the past four years than in the entire preceding century. While I don’t have a clue what explains this sudden explosion, as a musician and author I’m thrilled by it. But my interest led me to the obvious question: are there different ways that authors use music as a plot element?

Apparently the answer is yes.

Authors seem to favor one of three basic approaches: music as background, music as key, and music as atmosphere. As with any categories, the boundaries are fluid and good arguments can be made for placing a particular story in different categories. But let me lay them out for you, as I see them.

Music as background. For this rather straightforward approach, the author uses music to advance the plot, but the focus is not music. For example, in The Ballad of Black Tom (Victor La Valle, 2016), a mediocre guitarist in jazz-age Harlem accepts a gig from a wealthy man who wants to use him in a scheme involving the occult. La Valle cleverly revisits Lovecraft’s tale “The Horror at Red Hook” and blows up its racist tropes. While music is the vehicle that brings the two men together, it is not the key to the story’s outcome.

I’ll offer a few other examples of music as background. Heart-Shaped Box (Joe Hill, 2007) features an over-the-hill rock star who buys a haunted suit on the Internet. Two authors and a musician in The Wilderness Within (John Claude Smith, 2017) confront dangerous, elemental forces of nature in the forest. And in my own novel The Shatter Point (Jon O’Bergh, 2018), a college student in a band is pressured by his girlfriend to prove himself by undergoing the rigors of an extreme haunt.

Music as key. Some authors write stories where music affects the outcome in significant ways or is the focus of the story. In other words, music not only advances the plot but defines what occurs. In A Song for Quiet (Cassandra Khaw, 2017), a bluesman’s saxophone conjures Lovecraftian monstrosities from other dimensions. In Mad Black Wheel (Josh Malerman, 2017), a band in 1950s Detroit is recruited to investigate a mysterious, destructive sound in the Namib Desert.

Several novels where music is key play with the obvious affinity between metal and horror. In We Sold Our Souls (Grady Hendrix, 2018), former heavy metal guitarist Kris (who now runs the reception desk at a Best Western) learns that her ex-band’s front man sold the souls of the band members for fame and fortune. The 1983 novel The Armageddon Rag by George R.R. Martin (the author behind Game of Thrones) recounts efforts to prevent the comeback tour of a 1960s proto-metal band and a song that will unleash demonic forces when performed. Corpsepaint (David Peak, 2018) focuses on a washed-up, black metal band leader who has the opportunity to record a comeback album with the help of a reclusive cult. The anti-human music he ends up creating becomes a weapon for the cult’s nefarious purposes.

Music as atmosphere. Less frequently, authors use the presence of music to create a foreboding atmosphere. The prime example is Algernon Blackwood’s classic 1907 novella The Willows, where otherworldly sounds accompany sinister, elemental forces that terrify two men trapped on an island during a canoe trip. Jeff Jackson used an atmospheric approach in his 2018 novel Destroy All Monsters: The Last Rock Novel. In this case, music is not just background, and it’s not the key that affects the outcome. Instead, Jackson sets up an ominous mystery involving a pandemic where concert-goers murder band members during performances.

These are just a sampling of the available stories and the diverse voices creating these works. Whether you like your horror Lovecraftian, tongue-in-cheek, psychological, graphic, or whatever, there is something for all tastes. I’ve started a running list of titles for those who want to further explore the growing world of music in horror fiction: https://obergh.net/songoffire/2018/09/30/horror-stories-involving-music/. If you have a title to add, let me know. 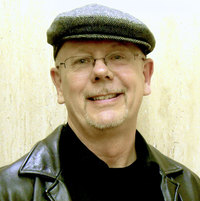 Jon O’Bergh is an author and musician who loves a good scare. He grew up in Southern California, where he received a Bachelor of Arts in Music from the University of California at Irvine. He has published four books and released over a dozen albums in a variety of styles, including the atmospheric album Ghost Story. His horror novel The Shatter Point is available in print and ebook formats from Amazon, Indigo, iBooks, Barnes & Noble, and other online retailers. After many years living in San Francisco and Washington, D.C., Jon now spends most of his time in Toronto.

Jada Mercer is used to getting her way, and she loves danger. When she meets Asher Williams, a sensitive musician in a band, she pressures him to prove himself through the rigors of an extreme haunt known as Horror Place. At the same time, the haunt’s owners, Phil and Donna Woods, are locked in an escalating feud with neighbor Ruth Littleton. The terrifying consequences unfold step by step as the characters are pushed beyond the breaking point. Weaving layers of truth and fiction, the story challenges our sense of reality with unexpected twists and turns.

LONGER DESCRIPTION: Everyone has a breaking point. So begins Jon O’Bergh’s suspenseful novel, The Shatter Point, an intriguing study of contemporary society wrapped inside a ghost story that is wrapped inside in a thriller. The novel confronts issues such as Internet celebrity, social media culture, and extreme thrills. But it also explores timeless issues of love, loss, and the ways in which we are haunted by our pasts.

Set in Southern California’s Orange County and historic Pasadena, the plot follows two parallel sets of characters whose lives eventually intersect. The past intrudes in unwelcome ways for each character. Donna remains troubled by a previous marriage that turned sour when the husband became abusive. Her son Billy fears that he inherited his father’s propensity toward violence. Feelings of inadequacy haunt Asher from his years being bullied. Ruth hides a series of traumatic incidents from her youth. Jada’s craving for stimulation leads eventually to disaster.

Much more than just a ghost story, the novel is a study of individuals under stress. The curious reader will discover different layers of reality versus fiction within the book. In a world haunted by the ghosts of the past–where reality is manufactured for popular consumption–how do we know what is real and what is fake, what is true and what is imagined? After the shatter point, the horror will become all too real.