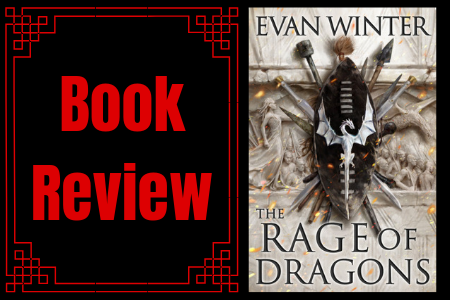 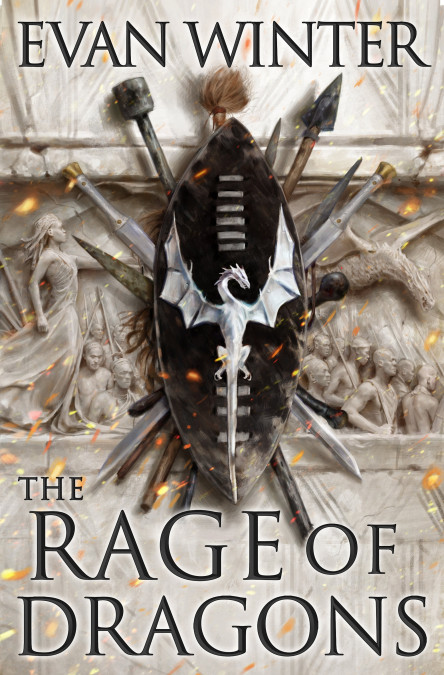 The Omehi people have been fighting an unwinnable war for generations. The lucky ones are born gifted: some have the power to call down dragons, others can be magically transformed into bigger, stronger, faster killing machines.

Everyone else is fodder, destined to fight and die in the endless war. Tau Tafari wants more than this, but his plans of escape are destroyed when those closest to him are brutally murdered.

With too few gifted left the Omehi are facing genocide, but Tau cares only for revenge. Following an unthinkable path, he will strive to become the greatest swordsman to ever live, willing to die a hundred thousand times for the chance to kill three of his own people.

Some books start quite slowly, setting the scene, others, they start with a bang. The Rage of Dragons is one such book, starting with a bloody sword thrust through the chest cavity, one that explodes out the back in a profusion of action.

After fleeing their previous home, the land of Osonte and a catastrophe known as ‘The Cull‘ the Omehi are newly arrived on the shores of Xidda looking for a new home but the current population has other ideas. What follows is a violent battle (highlighting the powers of the Omehi Gifted and the strength of Winter’s ability to write detailed and dynamic battle scenes that populate the whole of The Rage of Dragons right from the get-go) and many die on both sides. The Hedeni (also known as the Xiddeen the original inhabitants of Xidda) are overwhelming the Omehi, with no wish to flee and as a last gasp, the last roll of the dice, the Omehi summon a guardian (dragon). The dragon turns the tides of the battle, the Omehi win and in Xidda they have a new home.

The book then jumps forward in time to nearly two hundred years later, the Omehi have settled on Xidda but the war against the native Xiddeen (the Hedeni) is still ongoing, it hasn’t stopped and on both sides, blood is still being shed.

Tau is a normal Omehi from the Lesser caste, his role, at best is as an Ihashe in the endless war against the Hedeni. If he fails to get past the test to graduate to the Isikolo and the Ihashe training then his fate will either be as an Ihagu, the fodder of the military, those sent in first to battle, those whose role in the fighting is to die on the battlefields, to end up as carrion, nothing more, the walking dead, bones turning to dust. Or, if he refuses that then as a drudge, less than servants, nothing, a slave.

Tau doesn’t want to be a fighter, he lacks the stomach for killing and would rather work in the keep than go to war but regardless of his chosen path he first needs to pass the Ihashe testing and then the arduous training that follows. However, fate is a cruel mistress and something happens, something that shows the class divide within the Omehi people, the gap between the Lesser castes and the Noble castes (the Lessers are seen as being lesser, they are less than the Nobles, held down by the class system, low blood, low born, less, the law favours the Nobles, allowing them to treat the Lessers with contempt and as glorified servants) and Tau loses everything. He loses everyone close to him, hardening him, turning him to stone and his thoughts of the future change, warping to revenge and vengeance against those who have taken everything from him.

The only way for Tau to legally achieve his goal, his revenge is to gain military status by passing the training from initiate to become an Ihashe and then, he can, in all legality challenge those above him, those of Noble blood, those responsible for his loss to blood duels.

This is what The Rage of Dragons is, a revenge tale of the highest quality and a tale that is propelled along by Tau who is the fiery core, the ferocious spirit and the driving force of the story.

For a large portion of the book, Tau is blinkered. The Ihashe training he undertakes is simply a means to an end, a way to get his revenge and he doesn’t care about the war between the Omehi and the Xiddeen. Then, later on, his eyes are opened and he realises that there is more at stake than just his quest for revenge, it is still his goal, his purpose but he can see that fate of the entire Omehi people is in the balance. The Omehi are losing the war, with each cycle less and less Gifted are being born, and there aren’t enough Nobles either. The vast hordes of the Xiddeen are attacking more and more frequently, pushing the Omehi back, sensing weakness in their enemy, gaining ground and preparing for the killing stroke.

To survive the Omehi people need to change their ways, their old ways, the rigidity of the castes, from Common/Lesser through to Petty Nobles through to Greater/Royal Nobles is out-dated and people like Tau can only rise so far before they reach the glass ceiling. As a people they are dying out, fading away, every life should matter, every life should be equal and that is what Tau is also fighting for, his revenge but also for the life of a Lesser, a life that should be worth the same as that of a Noble, they all bleed the same.

The Omehi have Gifted at their disposal, only Omehi women can be Gifted and can safely access the power of Isihogo (Isihogo is the demon world where the power the Gifted use is pulled from). It is a land where demons dwell, a twisted version of the real world with muted colours and swirling mists. Those who are Gifted can hide in Isihogo, they can cloak themselves, mask their presence so that the demons can’t see them. There are different powers available, an Enervator can use power to unleash a wave of energy temporarily sending the souls of those hit with the blast into the land of Isihogo at the mercy of the demons that inhabit the land and incapacitating them. Time passes slower in Isihogo and an Edifier can use it to carry messages to others far away. An Entreater can use the power to bind their will to that of another (that is how the Gifted control the dragons). Finally, an Enrager can channel the power of Isihogo into an Ingonyama (the best Noble fighters in the Omehi military) amplifying their size, strength and speed and turning them into hulking huge behemoths.

As a land Xidda is arid, dry and dusty with sparse food supplies and water, harvests are small and living off the land is hard. The rage of Dragons feels like Winter is only skimming the surface, caressing the skin rather than burying the blade in the flesh of his world with much more waiting to be discovered in the future books.

I liked Winter’s writing and felt that it flowed well, there was always something going on, something that moved the story forward, there is a depth to the characters, the story and the world, the pacing is fast and there is the occasional touch of emotion and humour added to the mix too.

There is something comforting, something familiar about The Rage of Dragons but, at the same time, there is something new, something refreshing about it too. It is an outstanding debut from Winter, a book that includes everything that is good about modern fantasy and a book that fully deserves to be a hit. As the main character Tau is someone that you are invested in, the other characters who fill out the rest of the cast all have a role to play, the Omehi, the caste system and culture of the Omehi, the politics, the Xiddeen, the magic and the demon-infested realm of Isihogo and finally, the dragons (they are only sparingly used, they are the last resort in any battle, they are devastating, calling them in has a cost, they destroy everything, ravage the world and there is an additional cost to the Gifted too) all have a place in the story, all are used to form the whole picture and combined together all help to create what is an electrifying read.

From the beginning to the end The Rage of Dragons is brimming with intense action and heart-pounding spectacular fight scenes. Whether it is Tau training, sparring/duelling one-on-one or full-scale large battles and huge set-pieces they are all vivid, visceral, weighted and cinematic. Winter has a keen eye for writing the scenes, they have a heft to them, you feel every blow, every punch, every bone-jarring strike and every sword thrust.

Tau can’t change who he is or that the Nobles are bigger with better blood than him and he isn’t even the strongest or the tallest Lesser but he is resolute, driven by desire and internal strength. He pushes himself to the limit and then pushes some more, every time he is knocked back down, he rises back up, he won’t quit, he’ll die before he gives up. Tau is a very human character, his emotions can get the better of him, he can be fallible, foolhardy, impetuous, and rash but he is also determined and relentless no matter the cost to himself as when you are left with nothing, you have nothing to hold you back, nothing to lose. Tau has his hate, his rage that consumes, that devours and that fuels the fire inside, he wants to be more than his birth, he aspires to be more. He is a force of nature, far beyond driven, an oncoming storm as he seeks to improve his skill, to become better than his blood, pushing more, never losing sight of his goal, building strength, stamina, speed, a preternatural understanding of the blade, of fighting.

Tau is like John Wick if you got to see the training that John Wick went through to become an unstoppable killing machine hell-bent on retribution and The Rage of Dragons itself is a blood-soaked revenge tale with added depth and a whole lot of heart.