Today on The Tattooed Book Geek I am pleased to be closing the blog tour for The Poison Song the third and final book in The Winnowing Flame Trilogy by Jen Williams by featuring an excerpt from the book.

My thanks to Anne Cater for the tour invite and to Jen Williams too. 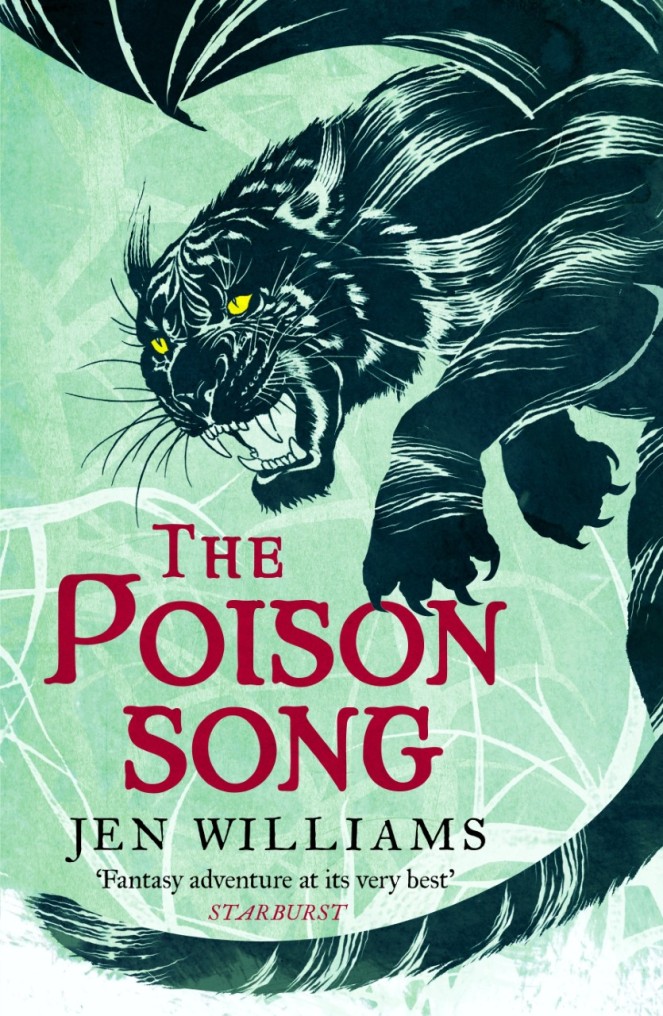 All is chaos. All is confusion. The Jure’lia are weak, but the war is far from over.

Ebora was once a glorious city, defended by legendary warriors and celebrated in song. Now refugees from every corner of Sarn seek shelter within its crumbling walls, and the enemy that has poisoned their land won’t lie dormant for long.

The deep-rooted connection that Tormalin, Noon and the scholar Vintage share with their Eboran war-beasts has kept them alive so far. But with Tor distracted, and his sister Hestillion hell-bent on bringing ruthless order to the next Jure’lia attack, the people of Sarn need all the help they can get.

Noon is no stranger to playing with fire and knows just where to recruit a new – and powerful – army. But even she underestimates the epic quest that is to come. It is a journey wrought with pain and sacrifice – a reckoning that will change the face of Sarn forever.

Join forces with the heroes of the WINNOWING FLAME TRILOGY as they strive to silence the Jure’lia’s poison song once and for all.

Excerpt from The Poison Song (The Winnowing Flame Trilogy #3). 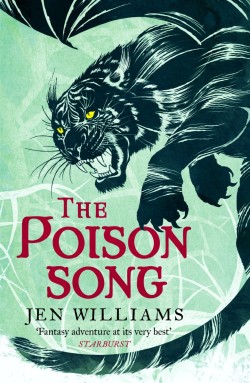 Fell-witches are very rare, yet Mushenska seems to produce more than its share of them. It’s as if the city creates them in defiance of the black towers that lurk across the sea from it. Today, we took a girl from a wealthy merchant family — a strange and delicate situation. Three of us were dispatched to take her in, with a sister assigned to add, I suspect, an extra layer of respectability. The parents were anxious we were not seen from the street and let us in through the back of their sizeable house (I have to wonder what are they planning to tell people? That their daughter has gone to stay with distant family? That she has gone to study at a college in Reidn? How long do they imagine they can keep up that pretence, especially when she never returns?). Their daughter, Marg, was fifteen and defiant. I knew immediately that she would give us trouble, and steeled myself while the parents greeted us with tea and fruit.

(The families we must take fell-witches from have many varying reactions. Most are sad, many are frightened. A distressing number are, as mine were, disgusted and ashamed. A few, like Marg’s parents, seem keen to treat it like an everyday, normal transaction. Their daughter could be starting a new job, or they could be selling an item of furniture. The clues to their distress are in tiny things: shaking hands, smiles that hang on the mouth a touch too long, a sweaty forehead.)

The moment came when Agent Lin indicated that we must leave. The girl Marg slapped a hand around her mother’s wrist, drained her to unconsciousness in a moment, and then threw a ragged swirl of winnowfire at us, which was easily avoided. To my surprise, she jumped for the window (we were two storeys up) but it seemed there was an awning below that caught her fall.

A chase then, through a busy Mushenskan street — so much for discretion. The girl did not get far, and no one was hurt, although there was a stall of cabbages that will not see market day again. Marg was drained and trussed, and we left without further delay. Agent Lin was not happy, but I reminded her: our concerns are to be for the Winnowry and our charge, not for disgruntled parents.

Marg is an interesting prospect. Spirited, angry, but possibly too willing to take risks. The Winnowry might sap the anger from her in any case. We shall see.

Some details about Marg of Mushenska: she looks strikingly like her father, tall and dark with thunderous eyebrows. She has no siblings. Her favourite fruit is the pear — her mother asked if she could send some on, when she was settled (as if this were a boarding school). She collected seashells, and had several in her pockets when we took her down. I threw them into the sea as we passed over on our bats.

Extract from the private records of Agent Chenlo

Vintage took the eyeglass away, squinting into the distance. It was possible to see them now without the contraption; seven giant bats with riders, looking like black-and-white smudges on the blue summer sky. It had been three months since Noon’s little incident at the Winnowry, and still new fell-witches were arriving every few days or so. Another seven would take their witch population up to thirty-eight.

‘Indeed.’ Vintage reached up and absently patted the war-beast on the snout. Since the sun had warmed the Eboran forests into lively places once more, he had grown a great deal, and although he still clearly mourned Eri, there were signs that this fresh bonding with her was giving him new strength. “But this is interesting. So far we’ve mostly seen them arriving on foot over the mountains, or there was that group that came via the Barren Sea. But on bats? Perhaps this could be our mysterious Agent Chenlo, finally come to join all the women she has apparently badgered into our company.’ She grinned. ‘Noon will be so pleased.’

With that in mind, she left the summer gardens, Helcate trotting at her back, and made her way to the south-eastern portion of the palace. Here, Aldasair had thoughtfully housed all their errant fell-witches close to each other, with many of their rooms facing out across a set of ornamental ponds. At its heart was one of the palace’s odd sprawling rock gardens, a concept Vintage had not come across before. Rather than a place of lush grass and flowers, there was a neat lawn punc- tured with artful piles of white and grey stone, themselves dotted with hardy little plants which had fat, bulbous leaves and blossoms of all colours. It had become an unofficial meeting place for the women, many of whom still seemed reluctant to mix with the other peoples of Sarn. She smiled to see them, a mixture of young and old women, several sitting on the grass chatting, with a few perched on the rocks, drinking tea. She could see from the blank wonder on their faces that they were still getting used to being outside at all. One child, surely no more than fifteen, sat with her fingers buried deep in the grass, her face turned up to the sun.

‘Morning, Carola.’ Vintage crouched by the girl, taking a moment to enjoy how easy it was to do this now — her broken ankle, after many long weeks, had finally healed. ‘How are you today?’

The girl beamed up at her. Her face, so pale and drawn when she had arrived, was gradually getting some colour. Vintage thought she could even see a few freckles.

‘I am very well, Lady Vintage.’ The girl’s voice was hoarse still – too many years spent in near silence. “The sun is out, I can eat what I like’ She patted the grass. ‘And the green of it all. It’s like being warm after years of being cold’ She shrugged. ‘And it’s warm, of course. There’s a rumour, Lady Vintage, that the Jure’lia are dead now. That your warriors killed them all with their tricks.’

Vintage felt her smile die a little. ‘Now then, darling, we can’t know that.’

‘No one has seen them for months! They all vanished from the sky after you fought them off. The girl tore up some blades of grass and watched them fall through her fingers. “That’s what everyone is saying, everyone who comes over the Bloodless Mountains.’

Praise for The Winnowing Flame Trilogy.

Jen Williams started writing about pirates and dragons as a young girl and hasn’t ever stopped. Her short stories have featured in numerous anthologies and her debut novel, The Copper Promise, was published in 2014 to huge acclaim. Jen was nominated in the Best Newcomer category at the 2015 British FantasyAwards and her following two novels, The Iron Ghost and The Silver Tide were both shortlisted for the British Fantasy Awards Novel of the Year. Jen lives in London with her partner and their cat.