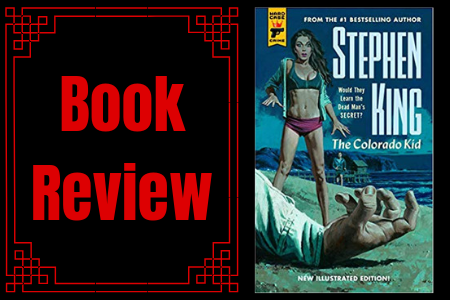 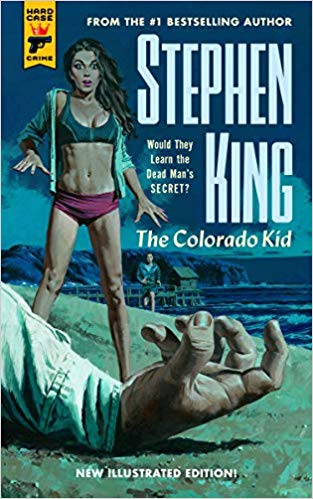 On an island off the coast of Maine, a man is found dead. There’s no identification on the body. Only the dogged work of a pair of local newspapermen and a graduate student in forensics turns up any clues, and it’s more than a year before the man is identified. And that’s just the beginning of the mystery. Because the more they learn about the man and the baffling circumstances of his death, the less they understand. Was it an impossible crime? Or something stranger still…? No one but Stephen King could tell this story about the darkness at the heart of the unknown and our compulsion to investigate the unexplained. With echoes of Dashiell Hammett’s THE MALTESE FALCON and the work of Graham Greene, one of the world’s great storytellers presents a moving and surprising tale whose subject is nothing less than the nature of mystery itself…

The Colorado Kid was first published in the US in 2005 and has been out of print for a decade. It was never released in the UK…until now.

You can see the love and the care have gone into creating the book and included within there is an introduction by Charles Ardai, one of the co-founders of Hard Case Crime. The book itself is an illustrated edition, featuring artwork from a plethora of talented artists and I have to say that the included artwork is phenomenal. I’m loving the whole aesthetic of the book and the sleek and sexy retro design of the cover just oozes charm and charisma harking back to a bygone age and era.

The Colorado Kid starts with lunch in a bar on Moose-Lookit, an island of the coast of Maine. Dave Bowie and Vince Teague, the two elderly proprietors of the island newspaper, The Weekly Islander along with their young new intern Stephanie McCann have met with a writer from the Boston Globe who is looking for stories about unexplained mysteries for an upcoming feature. Over the lunch, the duo of newspapermen share some of the local unexplained mysteries that abound in the area with the writer that they have heard over their many years in the business. The stories don’t leave an impression with the writer, they aren’t what he is looking for as he could go to any small island, any area and similar stories would be a dime a dozen. He soon departs from the bar in time to catch the afternoon ferry back to the mainland leaving Dave, Vince and Stephanie to finish their lunch before heading back to the office to resume work.

Later in the afternoon, back in the newspaper office and with her own interest in the subject piqued Stephanie broaches the subject with the duo, asking them about unexplained mysteries, the stories that surround them and that, if perhaps, they do have any stories to tell that for whatever reason, they kept back from the writer….they do.

There is a story to tell, a story that has nibbled away at them for a quarter of a century, one unexplained mystery, one story that belongs to the island, one story that is part of the island’s history. Even though Stephanie is an outsider to the island, someone who has only been there for three months, there is something about her, she gets the way of life, the island life, she understands the small community, the small-time yet important news, she belongs and in her Dave and Vince see a kindred spirit, someone who is like them and someone who is worthy of the mysterious tale of the Colorado Kid.

Twenty-five years ago, in April 1980 a dead body was found on Hammock beach by two high-school children out for an early morning run. The man was newly arrived on the island and then, less than a few hours after his arrival, he was dead. For sixteen months after his body was found the man was a John Doe, there was no name, there was no idea where he came from and there was no clue as to his identity. The only thing that they have is a cause of death but it is uncertain, it is a mystery, did he die accidentally? Was his death by natural causes? Was he murdered? Did he commit suicide

Then, thanks to a moment of insight over a year later, a flicker of memory about the old case, the young post-graduate forensics student, now at law school who was assisting the two investigating detectives at the time of the death notices something purely coincidentally. Something innocuous, something random that was overlooked and that finally shines a light on who the deceased mystery man is and where he came from. But, the question, more pronounced than ever after his identity and origin is revealed still remains of what was he doing on the island?

The Colorado Kid takes place over an August afternoon and a large part of the book plays out like a conversation that is full of the regional dialect and colloquialisms of the area between the trio of Dave, Vince and Stephanie. The three of them sit out on the deck of the newspaper offices and there is something enchanting, something magical about the way that the story unfolds between them as they while away the hours. The aged duo relate the story of the Colorado Kid to Stephanie, sharing, passing the telling of it back and forth with Stephanie, herself also getting involved, asking the occasional question, adding her own insights and thoughts.

The characterisation by King is, as ever, stellar, you expect nothing less from King and he once again delivers as his characters come to life on the pages both those in the story and those telling the story. Dave, sixty-five, Vince, ninety and Stephanie, twenty-two feel like real people and you don’t feel like a reader. No, you feel like you are involved in the conversation, you feel like you are sitting right there with them, part of something important, part of the group.

As a character, Stephanie is likeable and inquisitive but where King really shines is with the duo of Dave and Vince who are an absolute joy to read about. They are congenial old timers, affable, charming and friendly grandfathers, a duo who have great affection for each other and who share light-hearted banter. They are two people who have known each other for years, who are comfortable around each other and getting to spend some time with them was warming to the soul.

One issue that I can see people having with The Colorado Kid is the ending and the lack of a full resolution to the mystery. The ending is ambiguous with certain questions remaining unanswered and part of the mystery unsolved. Not every story is the same, not all endings are tied up nicely and presented with a bow in a neat package. In the world, unexplained and unsolved mysteries abound and it is the mystery, not the resolution that draws you in, that keeps you coming back looking for answers. As a species, we are curious by nature and the ending leaves the reader to contemplate, to muse on, to ponder, to think for themselves, it is very cleverly done and I liked it

I read The Colorado Kid in less than a day and like the characters in the book I whiled away my own pleasant sunny afternoon lost in the mystery of the Kid. The book itself is around 200 pages in length, only a short read but it a captivating story that is full of spirit, a little gem of a thought-provoking book.

King’s innate ability as a storyteller is on full display in the deftly woven The Colorado Kid and I found it to be a delightfully charming and thoroughly enjoyable read.