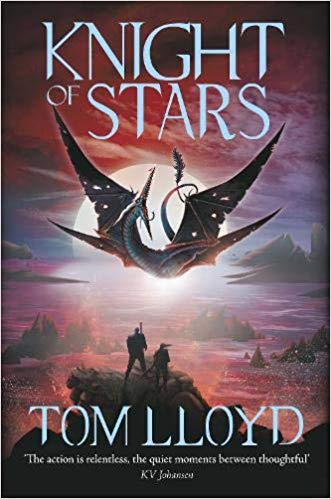 Lynx and the rest of the Cards are heading south. There’s money in their pockets, beer in their hands and a simple job ahead – sun, sea and not getting shot at much. Throw in the prospect of a bar fight and it’s almost a holiday.

But the volatile Mage Islands are a powder-keg, one just waiting for a spark. A bloody-handed exile perhaps, or the agent of a foreign power preparing for war. Maybe even a bunch of trigger-happy drunks who’ve upset the balance of magic across the Riven Kingdom.

Or all three together, that’d definitely work…

Knight of Stars is the third book in the God Fragments series and takes place shortly after the ending of the second book, Princess of Blood. The events that took place in Princess of Blood have left a mark upon the Cards and form part of the story that unfolds in the pages of Knight of Stars as answers are sort for transpired deep in the Duegar labyrinth beneath the streets of Jarrizar. Luckily, Lloyd handily includes a very brief recap and overview at the beginning of the book dubbed ‘what has gone before’ for the previous events in the series. For old readers, this acts as a refresher and for new readers, it will help them to know what’s been going on. While Knight of Stars can be read as a starting point in the series I highly recommend going back to the beginning with book one, Stranger of Tempest and starting from there as (with both Stranger of Tempest and Princess of Blood) you are in for a treat and some top quality fantasy.

After the events of Princess of Blood, Knight of Stars finds the Cards licking their wounds, mourning their losses, trying to figure out what comes next and in true Cards fashion drinking copious amounts of alcohol (to forget, to numb the pain and well, just because that is what the Cards are do) on a barge sailing to the Mage Islands where they have taken on what is supposed to be an ‘easy‘ job.

One of the Holdings on the Mage Islands has reneged on a loan, has been unable to pay back what they owe and are behind on their repayments. With the politics of the islands delicately balanced and the perpetual tensions between the various districts, mage guilds and those who hold power, outsiders are best for the job which is where the Cards come in. They have been employed by a bank and the job is simple, take control of the premises of the Holding so that the bank can then take over and run the Holding, recovering the debt that it is owed.

The cover as to why a group of well-armed and unsavoury mercenaries have just sailed to the Islands. Well, they have just fulfilled a contract, just finished a job and are looking for some downtime, some fun before they embark to the location of their next job and the Islands seem like the perfect place to let of some steam. For those with prying eyes, they have nothing to do with, no interest in the Mage Islands themselves, they are just passing through, killing time, drinking, relaxing and spending their pay.

Things are never that easy, never that simple and as sure as night follows day, as a hangover follows a Cards drinking session events soon escalate and the Cards find themselves right in the middle of it all. Getting themselves mixed up in the power struggle between the rival mage guilds and the rival districts as everything turns to shit.

One of the Cards is originally from the Mage Islands, though, it was another life, another name and it has been years since they have been back but there is history there.

Adding to the story, the Mage Islands were originally built by Mages and are home to many Mages, many powerful and prominent Mages. The Mages from the Cards are looking for aid from the island Mages. They wish to trade their first-hand knowledge of the Duegar labyrinth beneath Jarrazir for help from those who possess far greater insight, resources and understanding of magic in the hope that they will be able to offer them answers as to what happened to the Cards in the Labyrinth and what it means.

For those unacquainted with the series, I will mention the Duegar. The Duegar are a fallen civilisation. They didn’t build up, they built down and now, all that is left of them are the ancient vast underground ruins that run throughout the Riven Kingdom and that lead deep into the bowels of the world. The ruins are very dangerous and only relic hunters venture into them in the hopes of fame and fortune, in search of valuable artefacts and relics from the Duegar. The ruins are also home to an array of diabolical and lethal traps and in the darkness, in the pitch black, an assortment of monsters roam and huge creatures from nightmares dwell.

Anatin’s Mercenary Deck or, as they are more commonly referred to ‘the Cards’ are a foul-mouthed bunch, crass, vulgar and debauched with plenty of banter and bickering on display between them all. They are an unruly group of strong personalities and my favourites are the Commander, Anatin, Sitain, Teshan, Lynx, Toil, Deern, Llaith and Kas. The Cards are very rough around the edges but there is a loyalty to the company. Whilst they are definitely not the most professional they get the job done even if they fuck it up along the way and inevitably, everything goes to shit when they are around.

Mayhem, madness and general shenanigans follow the Cards and when you find yourself in their company you know that you will be in for a raucous time, a wild ride, guaranteed.

For me, the Stranger of Tempest from the Cards, the gruff, often surly and always hungry Lynx is the heart of the series. Originally from So Han, he isn’t like his fellow countrymen, he has honour, morality to him and he follows a code. He tries to do the right thing in a harsh world. He is a former commando who was imprisoned for going against the orders of his commanding officer and, upon his release years later, the only avenue, the only road open to him was to join the Cards. His past haunts him, his birth nation is like a chain around his neck as people see where he is from and judge him. What he has suffered, what he has been through have left a mark on him, a trauma, a wound that won’t heal. His demons follow him, the atrocities that he committed under the So Han banner (So Han tried and failed to take over their neighbouring countries through brutal means and those who were born there are now hated, despised by everyone) and from the years spent in the dark confines of a prison cell.

Once again we learn more about the magic and the world that Lloyd has created delving deeper and adding yet another layer to what we already know. Each of the previous two books has taken place in a different location and Knight of Stars is no different with Lloyd once again bringing us to new lands and a location that we haven’t seen before. The Mage Islands are well realised by Lloyd. They were once a pirate haven, a port and are now a trade centre. Caldaire, the multi-level stone city that was built and shaped by Mages and is made up of a ring of islands and comprised of different districts that are run by different crews. The hellmouths, a trio of ominous stone chimneys located in the centre of the ring of islands. The looming Etrel Cliffs and in the cliff face, at sea-level a massive shadowed maw of a cave mouth, a decaying Duegar canal that no-one dares enter as anyone who enters, doesn’t come out. Then, an important part of the Islands ecosystem is the Tysarn. The Tysarn are four-winged creatures (similar to butterflies crossed with dragons) that are attracted to the scent of blood and range in size from small to huge and both fly and swim.

I really liked how the story played out in Knight of Stars, how the threads wove together, converged and built towards the finale of the book. Add in the looming threat of war, kept well in the background, simmering away and hardly mentioned but there, for future books in the series and in your hands you have a gripping story that unfolds. One that is thrilling to read with some vivid big and bold action scenes that come to life on the pages and are exhilarating to read, some absolutely fantastic and often crude raillery and some quiet moments that can be both contemplative and retrospective.

Knight of Stars is action-packed, full of heart and FUN. Lloyd knows how to tell a great story with spot-on pacing, lots of action and plenty of banter. With the Cards, he has created an unsavoury and motley mercenary crew that is full of big guns and big personalities.