Welcome to my July wrap-up post featuring all of the fantastic posts on my blog that I posted during the month of July.

The Cards are a quality group of characters, an eclectic mix of rowdy delinquents and it was a pleasure to once again be reacquainted with them all in Princess of Blood (it has been ages since I read Stranger of Tempest and I had forgotten how great the banter was between the disreputable Cards, I love it, so much damn filthy fun).

The weapons, mage-guns with their ammunition, the mage-cartridges (earthers, burners, icers and sparkers) that are forged from the God fragments are a fantastic idea for weaponry. This time around the variety of weapons are expanded and we are given additional insight into the magic and God’s and how they tie together.

Anatin’s Mercenary Deck or, as they are more commonly referred to ‘the Cards’ are a foul-mouthed bunch, crass, vulgar and debauched with plenty of banter and bickering on display between them all. They are an unruly group of strong personalities and my favourites are the Commander, Anatin, Sitain, Teshan, Lynx, Toil, Deern, Llaith and Kas. The Cards are very rough around the edges but there is a loyalty to the company. Whilst they are definitely not the most professional they get the job done even if they fuck it up along the way and inevitably, everything goes to shit when they are around.

Mayhem, madness and general shenanigans follow the Cards and when you find yourself in their company you know that you will be in for a raucous time, a wild ride, guaranteed.

For me, the Stranger of Tempest from the Cards, the gruff, often surly and always hungry Lynx is the heart of the series. Originally from So Han, he isn’t like his fellow countrymen, he has honour, morality to him and he follows a code. He tries to do the right thing in a harsh world. He is a former commando who was imprisoned for going against the orders of his commanding officer and, upon his release years later, the only avenue, the only road open to him was to join the Cards. His past haunts him, his birth nation is like a chain around his neck as people see where he is from and judge him. What he has suffered, what he has been through have left a mark on him, a trauma, a wound that won’t heal. His demons follow him, the atrocities that he committed under the So Han banner (So Han tried and failed to take over their neighbouring countries through brutal means and those who were born there are now hated, despised by everyone) and from the years spent in the dark confines of a prison cell.

In essence, The Chain is a book of two parts. Without going into much detail, part one focuses on Kylie being kidnapped, her predicament and Rachel and Pete and their attempts to continue The Chain. How they go about getting the ransom money, researching and finding a suitable family and child to kidnap, planning, plotting, deciding how they will kidnap the child, where they will keep them, etc through to going through with the actual kidnapping, the emotional turmoil and all that comes with it and being part of and dealing with The Chain. While Part two delves into the past, we get to see the story of those behind The Chain, those who created it and its inception. It also focuses on the aftermath, the effects that The Chain has had on Rachel, Kylie and to a lesser degree Pete who are all suffering with and trying to come to terms with the horrors that they have been through. The Chain has invaded their lives, it is now part of them as they are part of it, it alters you, damages you, scars you, you can’t break The Chain but The Chain can break you. It has a hold on you, you will never be free, it is haunting them, smothering them, slowly killing them. The Chain is a slow suicide for those random unfortunate people who are unlucky enough to have been chosen as a link and it needs to be stopped.

Tomas is world-weary and wise. He has seen a lot, lived through a lot and risen up from being a nobody, from nothing to become someone of authority, of status and, in the leader of the Pious Men someone to be respected. Seen through his eyes and told through his words no matter what is going on in Priest of Lies Tomas is the heart and the soul as his narrative drives the story forward. He has a very individual and unique voice that comes to life through the writing of McLean (which is exceptional throughout). He is built from spit and sawdust rather than perfume, polish and powder. He is sometimes blunt, direct and forthright but, he can also be poetic, deep and profound with a biting black humour and whip crack retorts. There is a depth to him, a strength of character and we see him grow and learn more about himself. He is a tremendous character but he isn’t the only character to develop and along with Tomas, his brother, Jochan, Bloody Anne, his second in the Pious Men, Billy the Boy, Cutter, Fat Luka and Ailsa all have roles to play in the story and all develop too. There are many other characters too, some old, some new and those that I have just mentioned are, for me the standout with Bloody Anne, Billy the Boy and Jochan my own personal favourites. Regardless of whether they are main characters or peripheral, they feel real and the relationships between many of them are complicated.

Priest of Bones was fantastic, Priest of Lies is better. It is utterly brilliant, over far too soon, another dose of top-quality gangtasy (gangsters and fantasy) and features an ending that left me longing for, yearning for the next book. I mean, it is the perfect mix of gangsters and fantasy, what’s not to love?!?

Some of the stories in Invisible Blood aren’t quite on the same level as the others but there was no story that I actively disliked. Of course, I had my favourites and some that I wasn’t as keen on but there’s no blank, dud or misfire amongst the selection of little baby thrillers that are included in the collection. I admit that some of them don’t hit the target dead centre, I didn’t connect with them as much and they lacked the impact of the other includes stories. The stories are low on page-count and overall high on quality. Even if the story wasn’t one of my favourites I applaud the creativity and talent of all the included authors, their storytelling abilities (some stories are more nuanced and subtle while others are more dramatic) and the diversity of the whole collection.

The stories that at I really liked in the collection are All the Signs and Wonders by Denise Mina, The Washing by Christopher Fowler and Fallen Woman by Mary Hoffman.

I would say that the collection is worth buying purely for the opportunity to read Blood Lines by Stella Duffy, Black Dog by Cathi Unsworth, The Bell by Lavie Tidhar, Borrowed Time by R. J. Ellory,In the Belly of the Beast by Johana Gustawsson and Connecting the Dots by Jeffery Deaver as all are exceptional.

I think that Jakubowski has done a stellar job collating and editing the collection of short stories included in Invisible Blood. He has got together a fine set of talented authors with each of their stories brings something different and something individual to the collection. There’s no overall theme meaning that there is likely to be something for everyone included and this makes for a collection of darkly entertaining little gems. An assorted, eclectic and varied mix of stories and little nuggets of glorious thriller goodness.

Invisible Blood is like a bag of pick-and-mix brimming with tasty treats and full of deliciously dark delights.

Clausen packs a lot into the short page-count of Human Flesh. I really liked the use of the folklore and myth of the Wendigo and how it is incorporated into the story. The pacing is decent, you get a feel for the characters (as much as you can in a novella) and their personalities, the cold winter setting comes to life, the writing flows well and I loved the format in which the story is told. The use of the blog posts, emails and various transcripts work really well to keep you intrigued in the mystery that is unfolding through them.

There’s no outright gore throughout Human Flesh but there are a creeping unease and a sense of solicitude for what will come to pass. I found it to be easy to read, at times chilling, always page-turning and overall, a highly enjoyable horror novella.

The opening to They Come At Night sets a foreboding and ominous tone for what will follow, it hooked me straight away and made me eager to read the rest of the novella. I felt like I got a complete story from the short page-count, the story is easy to read, page-turning and flows well (as does the writing). There’s a good sense of atmosphere, particularly when the storm comes in on the final night as the story builds to its climax and the creatures are suitably sinister.

There are quite a few clichés along the way in They Come At Night but they are easy to excuse as it is a such a terrific dose of highly entertaining  B-movie horror fun in the form of a novella. 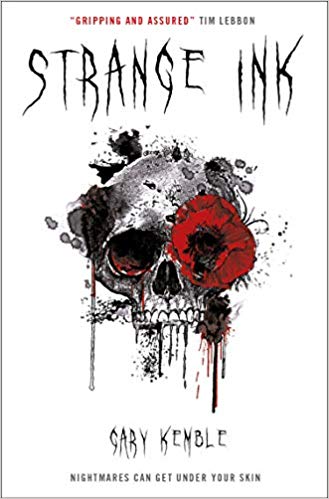 Biker gangs, drugs, corruption, greed, the horrors of war, the water tower, politics and the presidential candidate all have a part to play in the dark narrative. As Harry digs deeper the story strands that at first appear to be disparate pieces all come together. Once together they form a dangerous whole and build to a gripping culmination of the story told by Kemble.

The cover to Strange Ink is absolutely killer, the book features tattoos and the story sounded like it would dwell deep in the darkness. Those are things that should have made the book a ‘must-read‘ for me. Sadly, it wasn’t and I found Strange Ink to be rather hit-or-miss. It was a good 150-200 pages before I started to actually enjoy the book. Honestly, at one point, I was sceptical as to whether or not I’d even finish reading it and I considered giving up as I just wasn’t connecting with the book (both the character of Harry who I initially found unlikeable and the story) but I powered through. Now, after finishing, I’m glad that I persevered as after my initial apprehension Strange Ink turned into a creepy, dark and worthwhile read.