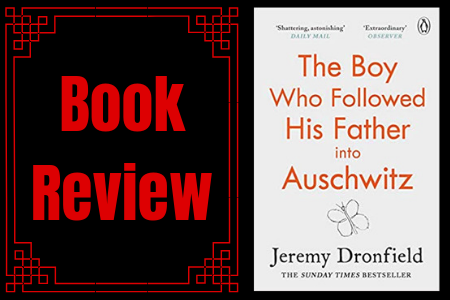 ‘Everyone thinks, tomorrow it will be my turn. Daily, hourly, death is before our eyes . . .’

Gustav and Fritz Kleinmann are father and son in an ordinary Austrian Jewish family when the Nazis come for them.

Sent to Buchenwald concentration camp in 1939 they survive three years of murderous brutality.

Then Gustav is ordered to Auschwitz.

Fritz, desperate not to lose his beloved father, insists he must go too. And though he is told it means certain death, he won’t back down.

So it is that father and son together board a train bound for the most hellish place on Earth . . .

This is the astonishing true story of horror, love and impossible survival.

“Weakened by starvation, subjected to soul-breaking labour, the living walked silent and hunched like spectres of the already dead”.

It feels wrong to write that I enjoyed The Boy Who Followed His Father into Auschwitz. Enjoyed isn’t the right word. Honestly, how can you enjoy something that is based on something so horrific? It feels disrespectful, like belittling history and making light of the persecution of the Jewish people and the atrocities that were committed in WWII. Instead, it is best to say that this book is an important book. A book that is harrowing, poignant and a book that has an impact upon the reader.

In Vienna, in 1939 after the Anschluss, Gustav Kleinmann, a furniture upholsterer and WWI veteran is seized by the Nazis. His teenage son, Fritz is also seized and the pair are taken to the Buchenwald concentration camp in Germany.

After three years in Buchenwald, Gustav is set to be transferred to Auschwitz, Fritz is not. Fritz, however, refuses to leave his Father’s side and even though Auschwitz likely means his death, Fritz demands to go there with Gustav.

The Boy Who Followed His Father into Auschwitz is primarily focused on the story of Gustav and Fritz but we also get to find out what happened to the other family members. Tini (Gustav’s wife and Fritz’s mother) and Edith, Herta and Kurt (their three other children and Fritz’s siblings) who were left behind in Vienna after Gustav and Fritz were taken away to Buchenwald.

The author’s own fastidious research, Gustav’s sparsely written diary that he somehow managed to keep miraculously hidden throughout his entire imprisonment, Fritz Kleinmann’s own memoir, interviews and correspondence by the author with Kurt Kleinmann have all been used to create The Boy Who Followed His Father into Auschwitz. It is written as a story but everything that takes place, every person involved, all of it happened and all of it is real. This is not fiction, you are holding history in your hands and knowing that is a sobering thought and one that lingers with you with every page that you turn. Reading about Fritz and Gustav, the Kleinmann family and the terrible things that they had to endure on a daily basis really brings home what they (and countless others) faced and it hits the reader hard.

The abuse that Gustav and Fritz suffer is graphic in detail with Dronfield depicting the brutality and harshness of the concentration camps and the torture that the pair endured. The author doesn’t over sensationalise events or add any excess gratuity for shock value. In the concentration camps for Gustav, Fritz and all the prisoners it is harsh with the spectre of death always looming over you. The daily struggle of survival, of being treated like animals, as cattle, as less than human, as nothing, the torment, watching, waiting, knowing that each day could be your last. Knowing that, even if you survive, if it’s not your time to die that you will have to repeat it all again on the following day. The depths of depravity on display, the sadism, the barbarity, the torture, the routine beatings, the doctors of death, the lethal injections, the starvation, the rampant disease and the twisted games that the guards would play at the expense of the prisoners. The sick games serving no purpose other than for the guards own vile amusement and as an excuse to mete out even more punishment and death. Your life in the hands of men who have nothing but malevolent intentions and evil in their hearts.

With the worst of humanity on display in The Boy Who Followed His Father into Auschwitz, there are also motes of light shining through too. The comradeship, the solidarity of the prisoners, the small acts of generosity between them and the humbling random acts of kindness from strangers who put their own lives at risk to help ease the suffering of others. For Gustav and Fritz, it is the will to live, the hope (even if it falters) that they will make it through, the determination to endure, the strength inside, the tenacity of spirit, the ties that bind and the unbroken, the unyielding love of a father for his son and of a son for his father.

While reading The Boy Who Followed His Father into Auschwitz you are transported back to a time that is one of the darkest in the history of the world. It is a moving, powerful and remarkable story that deserves to be remembered and deserves to be read.

Pre-order The Boy Who Followed His Father into Auschwitz released August 22nd, 2019.

14 thoughts on “The Boy Who Followed His Father into Auschwitz by Jeremy Dronfield Book Review. #BookBlogger #BookBloggers #BookReview @jeremydronfield @penguinUKBooks”