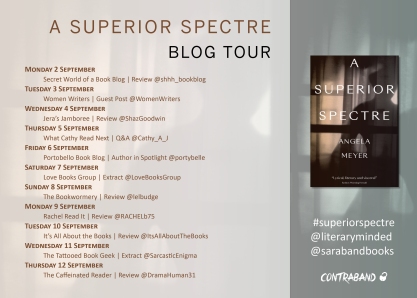 Today on The Tattooed Book Geek I am pleased to be taking part in the blog tour for A Superior Spectre by Angela Meyer by featuring an excerpt from the book.

My thanks to Julia Forster for the tour invite, Angela Meyer and Saraband Books. 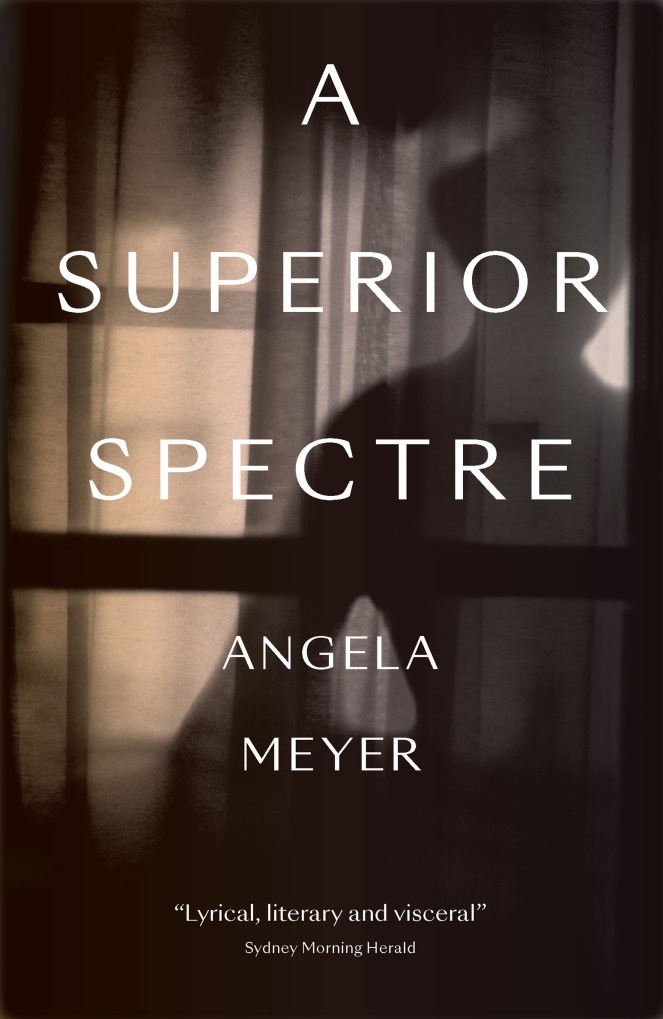 Jeff is dying. Haunted by memories and grappling with shame, he runs away to a remote part of Scotland with a piece of beta tech that allows him to enter the mind of someone in the past. Instructed to only use it three times, Jeff self-indulgent, isolated and deteriorating ignores this advice.

In the late 1860s, Leonora lives in the Scottish Highlands, surrounded by nature. Contemplating the social conventions that bind her, her contented life and a secret romantic friendship with the local laird are interrupted when her father sends her to stay with her aunt in Edinburgh. But Leonora’s ability to embrace her new life is shadowed by a dark presence that begins to lurk behind her eyes, and strange visions.

A Superior Spectre is a novel about curiosity, entitlement and manipulation. It reminds us that the scariest ghosts aren t the ones that go bump in the night, but those that are born and create a place for themselves in the human soul. 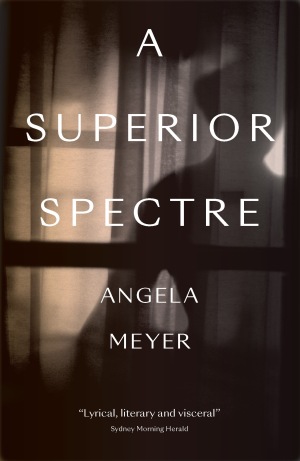 I came up slowly out of the trip, into a dark, unfamiliar room. I gasped, as from a sob, or as though someone had been holding my head underwater. I tried to take a proper breath, as I reached over and flicked on the lamp. Leonora’s dread, and melancholy, were lodged inside of me. I, too, loved her father, and dreaded the thought of life moving in a direction away from the place she called home. And what was incredible, I thought, as I sat up and took a sip of my whisky, which sat on the bedside table, was that I had felt what it was to have menstrual cramps. Not just cramps, but this entire bodily sensation of bloat, and heaviness, and the emotional overwhelm.

I then slept, worrying Leonora’s worries, occasionally realising I was doing so and realising how powerful this technology could be for someone like me, who no longer has any interest in self. Who can experience being someone else before dying.

By the morning, though, while I thought of her and wondered about what she was now, in the past, seeing and thinking – what her tastes were, if she would fall in love – I was returned to my own cumbersome, aching body, and I experienced my own cravings: for the book I was reading on Caravaggio, for fried eggs; my own lusts, my own shame, in the bathroom before breakfast. A man I was and am.

It was about three hours to Edinburgh on the bus that day, cash paid. We drove by sheep under windmills, rolling fields and vertical farms, patches of moorland, and purple-grey rocks jutting through grass. Often the road was elevated and the bank beside it would drop down and then roll up into a hill, patched with dark green pines. Castle ruins materialised on riverbanks, and often I’d see a lone house or cluster – a small village – in the elbow of a mountain. I looked out the window the whole time. I felt at home, but I interrogated that feeling. Though I have Scotland in my blood, from my mother, can you really recognise a genetic connection to place, to land? The feeling of ‘belonging’ was more likely due to the conscious knowledge of your bloodline, which then settled in your unconscious and presented as a feeling of comfort, of being at home. After all, my family was actually driven away, in the time of the clearances, when landlords moved their tenants off in favour of having sheep on their land.

I didn’t know yet if Leonora was in an area where this happened, or indeed what year it was that I had come across her. Dickens had cropped up in her thoughts, so it would be beyond the mid-1800s. The clearances were certainly widespread, long-lasting and tragic. People were forced out violently, and many others died or suffered greatly when they tried to make a new life in coastal areas, with less arable land. Some went south and tried to find work in cities. Many, like my ancestors, were shipped off to Australia, America, Canada.

Real suffering. With black lungs and blistered fingers, empty bloated stomachs, and grief. Nothing like the pains my middle-class friends would complain about now. The worst you could suffer with illness was a waiting list. Well, not for me. Suffering was something I was determined to experience. This pharma – a kind of anti-inflammatory – would last long enough to get me to my island and then I would be weaned, slowly, from chemical health.

When I left Melbourne, it was one of those sickeningly hot days, where metal turns to liquid, and a breeze feels like a blast from a hair dryer. One of those days where people without regulation systems built into their underclothes drop dead in the street. I arrived at the airport with a large bag full of clothes, toiletries and just a couple of personal items: a few postcards from art galleries, a pod full of music, a couple of books. I hadn’t cleaned up the flat; the buyers could have the rest: the oak bar, the retro olive-green couch, the half-drunk bottles of gin and Scotch. I do wonder sometimes what they might have done with the photo albums, or the printout of the family tree that Uncle Dave gave me when I was in my twenties and trying to work out if I was the only one. Not that you can really tell from a family tree. I never managed to find out much about Mum’s side, the ones originally from Scotland, except that there were some drunks. That’s all Mum would tell me. So perhaps there is some genetic anomaly. Her own father stopped drinking just before I was born, my dear old pa, but I don’t know much about what he was like before that.

The airport was quiet. Only about four planes leave per day, and they’re often cancelled if under-booked. Selling the flat had given me enough money for the trip, and for accommodation and food to get me through to the end. I left in the morning. I had been due for an appointment at the hospital that evening.

I checked my bag at the machine and then sat at the gate and read the Caravaggio bio, pausing frequently as panic struck a small, sharp tap to my head, just above my left eye. I don’t think I was panicked about what I was doing; it’d been meticulously planned and I was long resolved to it. The panic was about getting caught, and about being made to go back. I’d read carefully about how to remove the ID chip when I got there. Thank God the legislation never went through for ID chips to be placed in the head. Though cutting into my own double-chinned face might not have been much of a problem.

I knew I’d be scanned leaving the country, and arriving at my destination, but I hoped after that I would manage to slip away. Scotland is perfect because in patches it is still wild and remote, and cash is widely used, since the Scots are smart, or maybe just suspicious, and have seen the banks fall in so many other places, including of their former oppressors in England. And, you can still arrive in England and quietly cross the border into Scotland (or so I’d been told). As long as you are de-chipped and avoid any places where that might be noticed, you can hole up quietly in the Highlands.

Angela Meyer’s Joan Smokes won the inaugural Mslexia Novella Competition in 2019. Her short fiction has been widely published, including in Best Australian Stories, Island, The Big Issue, The Australian, The Lifted Brow and Killings. By day she works as a publisher for Echo Publishing, an Australian imprint of Bonnier Books UK, and in this role has discovered and developed a range of award-winning, globally published and bestselling talent, including global number one bestselling author Heather Morris. A Superior Spectre, Angela’s debut novel, is already shortlisted for a number of prestigious awards.

Angela Meyer is @literaryminded on Twitter and Insta. @literarymindedblog on Facebook. You can find her online at literaryminded.com.au where there are also some book club questions for A Superior Spectre. 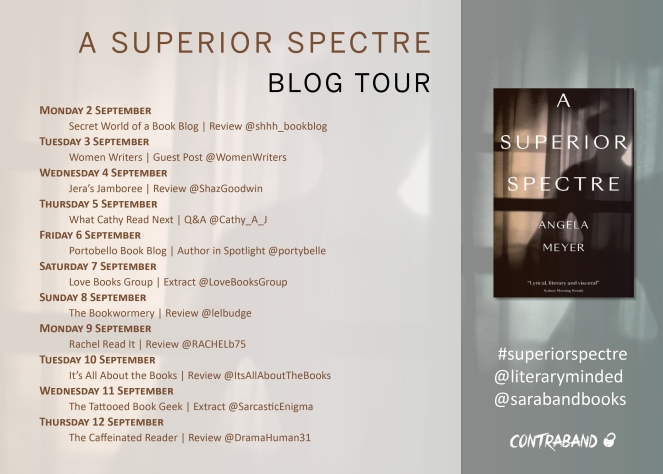