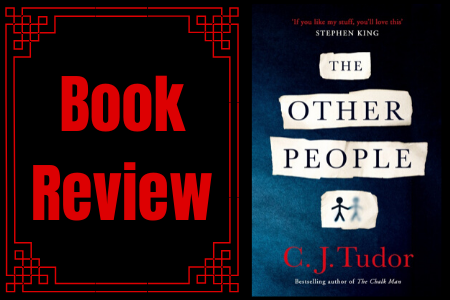 She mouths one word: ‘Daddy.’

He never sees her again.

Three years later, Gabe spends his days and nights travelling up and down the motorway, searching for the car that took his daughter, refusing to give up hope, even though most people believe that Izzy is dead.

Fran and her daughter, Alice, also put in a lot of miles on the motorway. Not searching. But running. Trying to keep one step ahead of the people who want to hurt them.

Because Fran knows the truth. She knows what really happened to Gabe’s daughter. She knows who is responsible. And she knows what they will do if they ever catch up with her and Alice . . .

I won a copy of this book courtesy of a Twitter competition.

The Other People is the third book by C. J. Tudor, I absolutely love her work and with her two prior books, she established herself as one of my favourite authors. Her debut, The Chalk Man was brilliant, her second book, The Taking of Annie Thorne was even better and, once again she continues that trend with The Other People, raising the bar, topping her previous book and delivering what is for me, her best book yet. The Other People is a sinister and darkly gripping delight combining mystery, thriller and an understated, creepy and sparse use of the supernatural to maximum pulse-pounding effect.

Three years ago Gabe was driving home,  stuck in a traffic jam on the M1, in front of his car was another, rusted, old, nondescript, forgettable, just a random car with a variety of stickers adorning the rear bumper and window apart from one thing that is etched in his memory…he saw his five-year-old daughter Izzy in the backseat of the car. Izzy had turned and was looking back at him as she mouthed one word “Daddy!”. Gabe gave chase but lost the car to the traffic, to the roads and to the blackness of the hour as the car sped away disappearing into the night.

However, while Gabe was driving home, while Gabe was seeing Izzy in a strange car a tragedy was occurring at his family home. His wife and his daughter were being murdered. The bodies were in the house, Jenny, his wife and Izzy, his daughter, dead. After taking ill, Gabe was unable to identify the two bodies himself and instead, his father-in-law identified the two bodies, confirming that they were his daughter and granddaughter, Gabe’s wife and child. But, Gabe can’t shake the fact that he saw Izzy in the back of the car, not mistaken identity, not a trick of the light but Izzy, his blood, his daughter, he is adamant that it was Izzy who turned, waved and mouthed “Daddy!” at him.

Since that fateful night, where Gabe’s world fell apart he has given up on his old life, abandoning his home, his job and everything that he was. He is heartbroken, shattered into a million pieces,  tormented by the loss, stricken and he can’t let go. The loss is consuming him, like an illness sapping his body of its vitality and he now spends his days, his nights, every hour available to him lost in an eternal nightmare and in his camper van searching. His entire being, his sole purpose revolves around the only thing that matters, finding out what happened to Izzy as he drives endless miles, travelling the M1 motorway over and over again in search of the car, in search of his daughter and in search of the truth.

The story unfolds through three perspectives, that of Gabe and then two others, Fran and Katie. Fran is accompanied by Alice, her seven-year-old daughter who suffers from narcolepsy and is plagued by visions. Fran is on the run and has spent years trying to stay safe, moving from place to place and running from dangerous people. And, Katie who works as a waitress at a service station that Gabe often visits, who knows him in passing due to serving him, who refers to him as ‘the thin man‘ due to his gaunt, emaciated and hollow look, like he is stretched too thin, like his essence is being consumed. And, who shares an affinity with him as she too knows the pain of loss, the heartbreak of tragedy and has also lost someone.

There are past and present timelines in The Other People which Tudor utilities to perfection, expertly weaving them together along with the three perspectives that make up the complete story. Narratives that, at first seem separate but, that are intertwined, that are linked and that will all ultimately join together, lifting up the veil, pulling back the mask and revealing the whole truth as the story travels down some stygian roads to its climax.

If you have read either of her previous two books then you will know what to expect from Tudor and her writing. The Other People is no different and is, once again, written to an impeccably high standard. Tudor has a way with words that effortlessly draws you in and leaves you transfixed. Her writing is descriptive, emotional, full of meaning, features some turns of poetic phrasing that verge on the macabre and there are also occasional pop culture references added to the mix too.

The mystery surrounding Izzy is compelling and makes The Other People impossible to put down as you begin to delve deeper, falling further down the rabbit hole and as you start to see connections sparking to life. There is a sense of menace that is palpable throughout The Other People and a feeling of unease as the story unfolds. There is a desperation to Gabe, a sense of urgency to his search as he clings to the hope that Izzy is alive like a drowning man clutching at a straw.  The sense of grief that Gabe feels is tangible and felt through the pages. The characters are fully-fleshed, damaged and flawed. They have their faults, they are fallible, they have made mistakes, they have motivations for their actions and as you read about them they feel real.

With The Other People, Tudor has created a chilling and gripping story, a thrilling tale that is shrouded in suspense, that remains with you long after you have turned the final page, that finds you relentlessly devouring the enclosed darkness with intense zeal and that is quite simply, unputdownable.