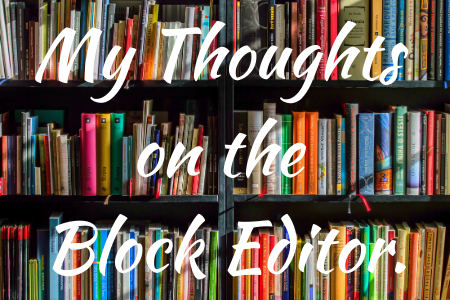 A couple of weeks ago when I got the email from WordPress telling me that the block editor was now my default editor it was one of the worst moments of my blogging life. Melodramatic? Maybe, but it is true. I had been dreading the email, I knew that it was coming, but I kept hoping that the changeover would be postponed, or, at the very least that my blog would be one of the later batches (preferably the last) to be transferred over.

Sadly, it wasn’t and the email arrived. Sliding into my inbox like a sneaky author who I’ve had no previous interaction with and whose book is in a genre that I don’t read sliding dry into my Twitter DM’s and attempting to pimp their work, unwanted. Sorry unknown author, I don’t reply to unsolicited requests through Twitter from someone who I don’t follow. Sadly, for me, I had no option with WordPress and the block editor. I could ignore the email, sure, after reading it I did, but I couldn’t get out of or ignore the change that was coming to my blog. It wasn’t a nightmare, I didn’t wake in the dark of night in a cold sweat with vague recollections of a cosmic tentacled horror trying to get into places where no tentacle should ever go.😂 No, it was real, it was happening, the block editor had arrived and the next time that I would go to draft a post it would be waiting for me.

Prior to the email, I had tried to use the block editor. On a few occasions actually in preparation of the change and each time it left me swearing, I didn’t have the patience and I failed to grasp it. It’s not difficult, quantum mechanics, stealth in a video game, getting triple-figure views on a blog post, talking to women, finding the light in the dark and seeing a future in a life of pain are all difficult. The block editor is none of those things and it isn’t difficult, but it is confusing, convoluted and utter shit. I wish that I had a more polite and profound way to describe it to you, I’m sorry that I don’t, shit is shit and the block editor is shit. It also sucks more than a gummy granny, no sexism here or a gummy grandad sucking on a lollipop.🍭😂 WordPress was simple, that is one of the main things that it had going for it, the simplicity of writing blog posts in the classic editor and the block editor has taken that away.

I ran a poll on Twitter regarding the block editor. Some bloggers have always used it, some like it, some are getting used to it and many HATE it!!! Yes, HATE in capitals and with exclamation marks as I HATE it with a passion.😂😜

You can see the poll results below:

For those of you who have always used the block editor (it was the default editor if you started your blog after a certain date). Then, if you are wondering what all the fuss is about and why we hate the block editor so much, this is why. The classic editor had a very simple interface, it was like word processing software, MS Word, Libre Office, Open Office, Google Docs, etc and yes, the block editor may well be clean and modern looking, but it is a drastic change for us, moving from something that we knew to the complete unknown.

Creating a blog post used to be easy, it was a few simple steps and hey presto, it was job done and the post was ready. Now, even though WordPress says that it is simpler, WordPress lies and there is a whole list of steps that we have to go through just to create (attempt, try, fail, induce a headache, curse and cry) the exact same blog post as before. It is an arduous process of a new block for this, a new block for that and a new block for every-mother-fucking-thing else, sigh, grumble, groan, it is hell, it is torture.🙄😩😤🤬

I do, sort of, trying to look at it objectively understand the benefits of the block editor, for some as it offers a far larger range of formatting options. Many, like myself, don’t have elaborate and fancy formatting on their pages and posts. We don’t want it and we don’t need it. We just want to add a couple of images, a few links and write our review with a few paragraphs of text, nice and easy and for that, the classic editor was perfectly adequate and the block editor with all its bells, whistles and fancy fluff isn’t needed. I mean, writing reviews can often be hard enough (for me at least) without the added trouble of drafting up the damn post too.😂

I always think that I fail as a book blogger. Well, the block editor and my failure with it just compounds those thoughts. I don’t like change. I’m old, stuck in my ways and a fossil compared to most bloggers. I’m not the most technology-minded person either, I wouldn’t have a clue about coding or anything like that and I struggle to grasp new technology and updates. The discovery of fire and the wheel was advanced enough for me.😂🔥⚙️😜

One thing, we have had the change forced upon us and I feel that we should have been given the option to stay with the classic editor. Some would have stayed, others would have swapped, it would be whatever editor is best for the individual blogger, but a choice should have been offered to us which, I don’t think is asking for much.

Maybe I should start a block editor support group where those of us who hate it sit around drink beer, smoke some Snoop Dogg finest special blend, offer each other support and badmouth both the block editor and WordPress.😂

It is good that some are managing to figure the block editor out, it really is, it gives others the belief that they will be able to figure it out too. It gives hope that we too might be able to, one day fathom out the unfathomable. However, for some, no matter how much time and effort they put into trying to learn something, simply, they can’t. I’m not alone and many are struggling with using the block editor. I know of one blogger who has gone on an indefinite hiatus since they were changed over and there are others who have avoided their blogs and who haven’t posted since the change either. I’m sure that as more are changed over that there will be more fallen bloggers. If you pay for your site you can download a classic editor plug-in, I’m on free WordPress and, for those of us on the free version of WordPress, sadly, we don’t have that option.

It is the truth when I say that the change to the block editor has ruined blogging and taken the enjoyment out of it for many.😢 We are book bloggers, we blog because we love reading, but we would still love reading even if we didn’t blog. We also blog because we love blogging and well, we all know what happens when we lose the enjoyment in something that we once loved…

85 thoughts on “My Thoughts on the Block Editor.”