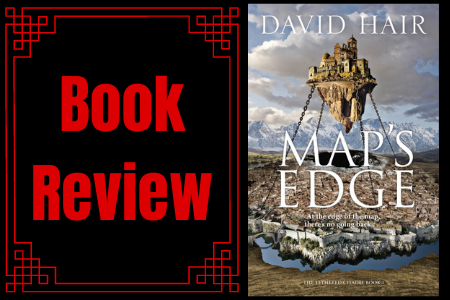 Dashryn Cowl has run out of places to hide. The erstwhile sorcerer of the Imperial College fled the Bolgravian Empire when his high-flying family fell from grace, but the tyrannical empire is still hunting for him.

So when he gets his hands on a map showing a place outside the known lands rich in istariol, the mineral that fuels sorcery, he sees a way back to power. There’s only one problem: it means masquerading as an Imperial Cartomancer (an instant death sentence) and finding some dupes to help him mine the istariol in secret, no questions asked.

But somehow, amid the dangers of the road (floods and avalanches, beasts, barbarians and monsters), a strange thing begins to happen: Dashryn starts to care about his ragtag followers and their strange odyssey into the ruins of an ancient forgotten civilisation.

But his past won’t let him be: the implacable Imperial Bloodhound Toran Zorne has caught his scent, and Zorne has never yet failed to bring his quarry to ground.

At the edge of the map, there’s no going forward and no going back . . .

Raythe Vyre, an Otravian noble, sorcerer and a commander in Colfar’s rebellion left Otravia four years ago, taking his daughter and fleeing from his homeland when a coup from within allowed the Bolgravian Empire to invade and take power, the subsequent rebellion to win back Otravia failed. Since then, hunted for his role in the rebellion and a wanted man with a price on his head Raythe has been hiding out and laying low under the assumed name of ‘Dash Cowley’ moving from place to place and running from the might and the long reach of the Bolgravian Empire. Finally, finding himself at the edge of the known world, in a Teshveld, a small frontier village. In Teshveld, for the last few months, Raythe has been masquerading as a healer on the fringes of society and along with Zar/Zarelda, his fifteen-year-old daughter the pair had settled into some semblance of life, getting by, but not living when events transpire to offer Raythe an opportunity and a chance at something more, a life free from the Bolgravian Empire and a return to living instead of barely surviving.

On the return journey back from a mission mapping the newly discovered land of Verdessa, a Bolgravian party led by a Bolgrav Lord arrives in Raythe’s village in urgent need of a physicker as their cartographer is gravely ill and requires medical assistance. Raythe comes into possession of the cartographer’s journal and in the journal, unbeknownst to the Bolgravians, hidden in his notes, the cartographer found a possible source of Istariol (the mineral that aids in powering large-scale and powerful sorcery) on the journey. The sample, taken from a river contained high traces of Istariol that had bled into the water and the cartographer’s writings indicate that there is a large quantity of the mineral within Verdessa. Raythe has the idea that if he can follow the traces and find the source of the Istariol then the mineral could be excavated, mined, used and sold for vast amounts of money to help fund a new rebellion to reclaim Otravia from the hands of the Bolgravian Empire allowing Raythe and Zar the chance to finally go home.

The expedition to find the Istariol will be a vast undertaking of many months and hundreds of miles into the perilous unknown. Should Raythe be successful in finding the Istariol it will require a large body of people to mine the mineral. Teshveld is a place where those who had dreams that died and who are haunted by their past go, it is a place that you end up when you have lost everything and have nowhere else left to go. Just like Raythe, each villager has their own history, reason and story as to why they have ended up in Teshveld and it is home to many who have been forced to flee and who have lost their homes and their countries to the Bolgravian Empire. There is no love lost for the Empire in Teshveld and the population (mostly) comprises outlaws and refugees from various nations who have all suffered conquest the hands of Bolgravia as the Empire extends its bloody and brutal reach and its regime of oppression further and further across the world of Shamaya. Amongst the villagers, Raythe finds many who are willing to join him, who are prepared to take a chance to get out from under the yoke of the Bolgravian Empire in search of a future, riches and the hope of something better.

With a full travelling community of families and a large caravan of carts and wagons accompanying him, Raythe will follow the Ghost Road out of Teshveld leaving behind civilization, walking untravelled roads and venturing forth into the heart of the new and uncharted land of Verdessa. The journey to the source of the Istariol will be fraught with untold difficulties, hardships, obstacles, setbacks, treachery from within, internal conflicts, power struggles and dangers as the group traverse ancient underground Aldar ruins, frozen lakes, vast glaciers, forests, the harsh elements, hostile environments and face-off against the deadly Ferali (animalistic wild men) and ghouls.

The faraway, wild and untamed lands of Verdessa aren’t the only dangers that Raythe will face in Map’s Edge. Toran Zorne, an Under-Komizar in the Ramkiseri (the Bolgrav Secret Service) has been assigned to track down the renegade Raythe Vyre and is on his trail. The cold-blooded, stoic and ruthless Zorne is like a bloodhound, implacable, dogged, determined and relentless in the pursuit of his quarry and he will stop at nothing, enlisting the aid of Captain Larch Hawkstone and the Governor’s Borderers (the law enforcement in Teshveld) and a contingent of Bolgrav marines to hunt down Raythe.

There is a level of care and depth to the world-building in Map’s Edge, Teshveld, Otravia, the Bolgravian Empire, Verdessa and history, the Aldar, a race that perished centuries ago in the Mizra wars that caused the Ice Age and created the Iceheart. With certain aspects, there is definitely more to be seen with Hair only scratching the surface especially when you factor in the revelations and reveals that take place during the story that will expand both the story and the world in future books.

In Map’s Edge, the magic system is clever and well thought out. There are two types of magic, Praxis and Mizra. When the magic first manifests, budding and blossoming like an unfurling flower within, you open your soul and choose a spirit from the nebulum, the spirit world, but you must choose the right one and bond, becoming more than one, two parts of the same whole creating a lasting and strong connection. The familiar is invisible and can only be seen by other sorcerers and together, the sorcerer and their praxis-spirit form a partnership, the familiar acts as the energy, the channel that brings magic into the world and the sorcerer is the conduit through which the sorcery is cast. Praxis magic and the Praxis-spirits are attuned to nature, nurturing and healing, cultivating a symbiotic relationship between the spirit and the sorcerer while Mizra magic and the Mizra-spirits are the opposite, damaging and destructive, the Mizra-spirit will destroy the sorcerer infecting them inside with their hatred, Mizra magic helped to bring about the downfall of the Aldar and practitioners in the present are seen in the eyes of most to be evil. Raythe is a Praxis-sorcerer with his familiar, Cognatus, a Praxis-spirit. There are also the sinister Izuvei, sorcerers in the employ of the Ramkiseri who mutilate themselves to become more attuned to the nebulum and the spirit world.

An eclectic mix of characters all with their own individual personalities populate the pages in Map’s Edge, along with the charismatic Raythe and the menacing Zorne, you have Zar (Raythe’s daughter and soon-to-be sorceress), Kemara Solus (a Ferrean healer and lay-sister with the church), Mater Varahana (a former scholar and Deist priestess), Sir Elgus Rhamp (a Pelarian knight), Vidar Vidarsson (a Bearskin and Norgan ranger) and finally, a personal favourite of mine Jesco Duretto (a Shadran mercenary). Hair has a flair for the interaction between the characters, the various group dynamics at play, the relationships and there is some absolutely terrific banter to be found too. Written in the third-person the writing in Map’s Edge is accessible and easy to read creating an energetic and fast-paced story that is full of tension, set across a variety of vivid locations, featuring action that is lively and punchy, aggressive combat and some intense use of sorcery.

Hair is a talented storyteller and Map’s Edge a satisfying and fun read, entertaining and rewarding that will sate the appetite of any fantasy lover looking for an epic adventure. Simply, it is a quality dose of classic fantasy that left me excited to read more.