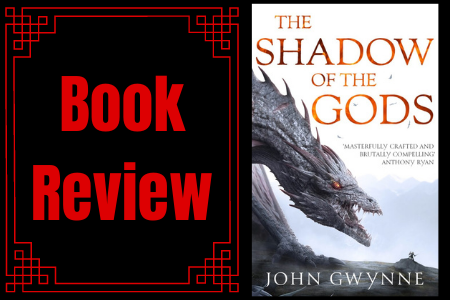 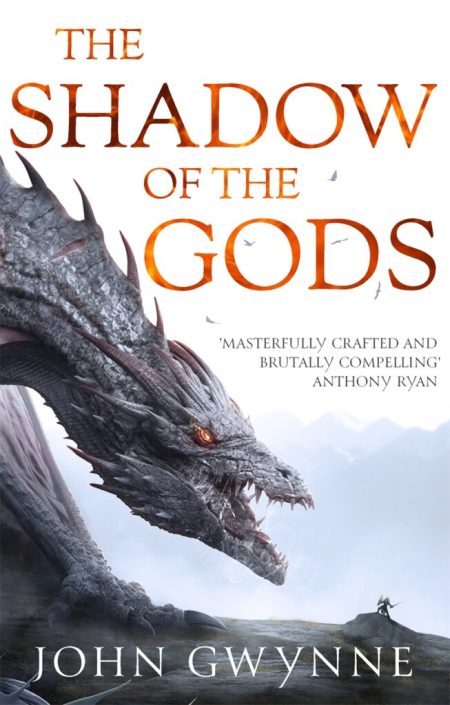 After the gods warred and drove themselves to extinction, the cataclysm of their fall shattered the land of Vigrið.

Now a new world is rising, where power-hungry jarls feud and monsters stalk the woods and mountains. A world where the bones of the dead gods still hold great power for those brave – or desperate – enough to seek them out.

As whispers of war echo across the mountains and fjords, fate follows in the footsteps of three people: a huntress on a dangerous quest, a noblewoman who has rejected privilege in pursuit of battle fame, and a thrall who seeks vengeance among the famed mercenaries known as the Bloodsworn.

All three will shape the fate of the world as it once more falls under the shadow of the gods . . .

All of Gwynne’s previous work was set in The Banished Lands, but his latest The Shadow of the Gods (The Bloodsworn Saga #1) is a brand new start for the author featuring an all-new cast of characters, a new setting and a new world with new legends to be forged and new adventures to be had.

The Shadow of the Gods takes place in Vigrid also known as the ‘Battle-Plain’ in The Shattered Realms. Three hundred years have passed since the pantheon of gods warred against and destroyed each other, breaking, nearly destroying and reshaping the world. In the death throes of the devastating god war, in their death and as a fallen god fell to the ground the land ruptured opening a pit to the underground which released vaesen (creatures and monsters) into the world above. Vigrid is a Norse-inspired broken, brutal, unforgiving and violent world where conditions are harsh and life is hard. It is a land of fjords, forests and mountains, of villages, towns, and larger settlements, of roaming warbands, of savage creatures and monsters and of the dead gods, their relics and their colossal bones that still hold remnants of their power.

In The Shadow of the Gods, the story is told through Orka, Elvar, and Varg a trio of well-developed POV characters. Each POV is bolstered by a rich cast of memorable supporting characters, some with smaller roles and some who are key and prominent with far larger roles to play in the unfolding story. Dark deeds and rumours plague Vigrid and children are being taken for an unknown purpose. Orka, Elvar and Varg each find themselves on their own perilous journey as they all become embroiled in the search for the missing children, their own personal quests for vengeance, for battle-fame and the struggle between Queen Helka, Jarl Storr and others who all vie for power over Vigrid.

Orka is a mother and a trapper who lives out in the wilds with her husband Thorkel and their young son Breca in a remote steading. Orka has a past and has left behind who she once was trading violence and bloodshed for an isolated and quiet life and only ventures to the nearby village to occasionally trade goods and animal pelts with the villagers. Elvar is a young warrior with the Warband known as the Battle-Grim and a jarl’s daughter who left behind a life of chained power and wealth for freedom. Elvar rejected her life of privilege to become a nobody with the chance to make a name for herself, rising through the ranks of the Battlegrim and carving her own path, earning her own battle-fame, respect and reputation. Varg is a former thrall who gained his freedom and is a recent addition to the ranks of the Bloodsworn, a renowned mercenary company. Varg is yet to take the oath to fully become a member of the Bloodsworn, as first, he needs to prove his worth in battle, earn his battle-fame and show them that he is worthy of joining their ranks.

The Shadow of the Gods is written in the third-person with Gwynne’s ability to immerse you, transporting you alongside the characters allowing you to live and breathe the story on full display. There is a depth to the world-building which is extensive and detailed. The imagery is vivid, the settings where the story takes pace easy to picture and the action scenes are visceral and weighted with a heft to them, the bone-crushing blows of weapons reverberate and the sounds of battle echo from out of the pages. The storytelling is balanced mixing together action, adventure, suspense, tension, revelations, story and character development. There are moments of humour, moments that are emotionally charged, explosive moments full of drama, slower and more quiet moments that act as the calm in the storm and many personal and powerful moments found throughout the story.

If you are a seasoned reader of Gwynne and have read his previous work then you will already know what to expect from The Shadow of the Gods which contains all the staple elements that we have come to expect and love in a Gwynne book, it is quintessential Gwynne honed to perfection, sharpened to a deadly edge and it does NOT disappoint. For new readers enjoy your first time experiencing Gwynne as he is a magnificent storyteller of gritty and grim fantasy that is full of heart. For old and new readers alike, simply, you are in for a treat as The Shadow of the Gods is absolutely stunning, one hell of an epic series opener and a spectacular dose of Viking-flavoured fantasy.

Pre-order The Shadow of the Gods (The Bloodsworn Saga #1) by John Gwynne released on May 6th, 2021.

13 thoughts on “The Shadow of the Gods by John Gwynne Book Review.”