The Book of Accidents by Chuck Wendig. 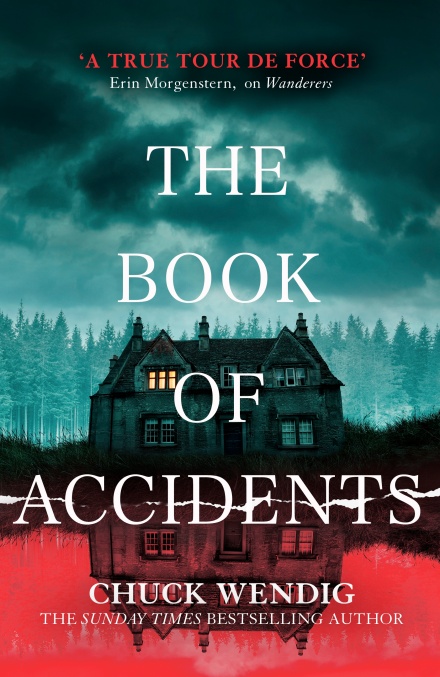 When Nate’s father dies, he leaves behind a final gift for his son: his childhood home. Married now, Nate decides to move in with his wife, Maddie, and their son, Oliver, seeking peace from the chaos of the city.

But it doesn’t take long before things get strange in the night and even stranger by day.

Because Nate was a child being abused by his father, and has never told his family. Because Maddie was a little girl who saw something she shouldn’t have. Because something sinister, something hungry, walks in the tunnels and the mountains and the coal mines of this town in rural Pennsylvania…

And now, what happened all those years ago is happening again, and this time, it is happening to Oliver. When he meets a strange boy with secrets of his own and a taste for dark magic, he has no idea that what comes next will put his family at the heart of a battle of good versus evil.

The Book of Accidents is published by Del Rey in the UK and the US and is scheduled for release on July 20th, 2021.

I was a huge fan of Wendig’s previous book Wanderers, it was one of my favourite books of 2019 and it is a hefty dose of post-apocalyptic awesomeness. The Book of Accidents is a different genre than Wanderers, it’s horror, but the blurb is darkly enticing and it sounds like a creepy and sinister read.

For the post I used the UK cover, I am in the UK, it makes sense and I also think that the UK cover is stunning. For you US folks, the US cover is:

Chuck Wendig is the New York Times bestselling author of Star Wars: Aftermath, as well as the Miriam Black thrillers, the Atlanta Burns books, and Zer0es and Invasive, alongside other works across comics, games, film, and more. He was a finalist for the John W. Campbell Award for Best New Writer and an alum of the Sundance Screenwriters Lab, and he served as the co-writer of the Emmy-nominated digital narrative Collapsus. He is also known for his popular blog, terribleminds, and books about writing such as Damn Fine Story. He lives in Pennsylvania with his family.

10 thoughts on “Can’t-Wait Wednesday: The Book of Accidents by Chuck Wendig.”