Today I am handed over my blog to a fellow blogger, David Prestidge from Fully Booked. David was kind enough to write a guest post for my blog called Crime Fiction Road Trip.

The post is a tour of the UK and features 20 stops around the country stopping at towns and cities and looking at the detectives who investigate crime in those locations.

The Crime Fiction Road Trip will be split into two parts. 10 stops for each part and this is part one with part two to follow soon.

The itinerary for part one is: 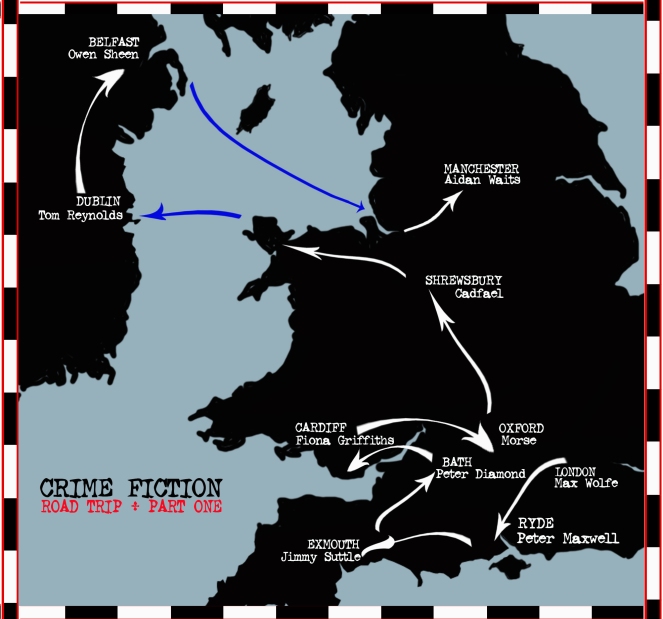 I hope that you all enjoy this fascinating trip around the UK and I would also like to offer my thanks to David Prestidge for writing this fantastic guest post, thank you.

I’m going on a crime fiction road trip around the country, and I have a spare seat in the car, so strap in, and let’s go! We start in London; not my favourite city, I’ll admit, but Tony Parsons loves the place, and his Max Wolfe novels are London through and through. Max is a relatively lowly DC with the Met who manages, however, to investigate some fairly heavy-duty crime. He loves his daughter, his dog and his job in that order and has featured in six full-length novels, plus a number of short stories. My tip for a starter? I’d go with The Hanging Club (2017). Wolfe is trying to nail a group of rather vengeful vigilantes, and during his pursuit, he discovers a macabre part of hidden London that actually still exists.

After the grime of London, we need a breath of seaside air so we’re heading south, in the direction of the Isle of Wight. After a breezy 45 minutes on the ferry, we reach Ryde, the home of one of the more original amateur detectives. In the books, the town is called Leighford, but it’s the home of Peter ‘Mad Max’ Maxwell. He is Head of History at the local comp, but has a habit of becoming involved in murder cases. The author, MJ Trow was, at least in terms of teaching, a dead ringer for Max, as he taught at Ryde High School for years. Peter Maxwell is sarcastic, loves his puns, and whiles away his spare time by painting tiny model soldiers from the Crimean War era. Mad Max at his best? There were 19 books in the series, all of them beautifully written, but I recommend Maxwell’s Inspection (2004). It will have a particular appeal for any teachers who have suffered at the hands of OFSTED!

It’s a brave writer who has the confidence to kill off a much-loved character but Graham Hurley did just that with his wonderful but melancholy Portsmouth copper, Joe Farady. All was not lost, though, as Hurley picked up one of the auxiliary characters from that series – Sergeant Jimmy Suttle – and gave him a life of his own. To meet Jimmy, we return to the mainland and drive 140 miles into the West Country to Exmouth. The move south-west has not been entirely successful for Jimmy, at least in his personal life. His journalist wife struggles with their leaky isolated cottage, and the disintegration of her professional life, while Jimmy struggles to identify his priorities. For an example of brilliant crime writing led by nuanced and perceptive character development, try The Order Of Things (2016).

From Exmouth, we set off to Bath, and I’m taking the scenic route via Taunton, Glastonbury and Wells to meet up with Detective Chief Superintendent Peter Diamond, and his creator Peter Lovesey. Diamond has been on the case (or cases – 18 so far, with another due in July) since 1991, and is a quirky, cultured and undeniably smart copper with more than a touch of Adam Dalgliesh about him. My pick for a good example of a Peter Diamond investigation is The Tooth Tattoo (2013) where our man gets to grip with a baffling case involving a stolen viola, a dead Japanese student and an internationally celebrated string quartet whose members’ lives are as complex as the music they play.

Wind and weather permitting, we journey next across the Severn Bridge towards Cardiff, and the unique world of Detective Sergeant Fiona Griffiths. Without doubt, Harry Bingham has created the most intriguing female detective of modern times, partly due to her unique insights – a by-product of Cotard’s Syndrome. This rare condition has many symptoms, the strangest of which is the belief that you are actually dead. In Fiona’s case, she has overcome the worst of, but what remains is a kind of intuition which is almost painful. In The Dead House (2016) a young woman is found, very dead, but dressed in white linen, remarkably peaceful, surrounded by votive lights, and lying on a table in a Dead House – an ancient form of mortuary chapel attached to a medieval church. Investigating, Fiona immediately spots a strange paradox – why would a woman who has had, according to the autopsy, subtle – and expensive – cosmetic surgery, have stubbly unshaven legs?

I have a slight attack of anxiety over the next 100 miles or so as our next appointment is with a prickly gentleman who loves his opera, his crosswords and his real ale – but doesn’t suffer fools gladly. As what Matthew Arnold called “the dreaming spires” of Oxford appear on the horizon, I’m wondering if there is anything left to say about Colin Dexter and his immortal Inspector Morse? Was there ever a more impressive instance of superb books being taken to the next level by a sublime television portrayal? With so many masterpieces to choose from, it’s not easy, but I’m going with Service of All The Dead (1979) partly because of the eerie atmosphere surrounding a series of deaths connected to an Oxford church, but also due to the literally biblical structure of the book chapters – one of Dexter’s masterstrokes.

Northwards and back into another century, now, to a town that posh folk call “Shrows”, and the locals call “Shrews”. The Abbey Church of Saint Peter and Saint Paul, Shrewsbury, was once home, if Edith Pargeter a.k.a. Ellis Peters is to be believed, to a former soldier, now a herbalist friar called Brother Cadfael. In 21 books over 27 years the benign but shrewd Benedictine monk set the standard for medieval historical mystery stories. Pargeter’s historical knowledge was welded to her skills as a natural storyteller. If you’re new to the series, try The Virgin In The Ice (1982). It is a captivating mix of a brilliant description of the kind of winter that is now just a distant memory, and a telling portrayal of family loyalties stretched to breaking point by civil war.

My route planner tells me that the best way to get from Shrewsbury to Belfast is via Holyhead, take the ferry to Dublin and then on to Belfast. I know this feature is about British detectives, but to pass through Dublin without paying a visit to Inspector Tom Reynolds of the Garda Síochána. Jo Spain introduced him to us in 2015 (With Our Blessing) Fictional Detective Inspectors have a habit of being alcoholic mavericks constantly at odds with their superiors and with chaotic personal lives, but Tom Reynolds is a delightful family man as well as being a bloody good copper. Jo Spain writes like a dream; she has a wonderful ear for dialogue, and creates an atmosphere that sucks you into the narrative. In Sleeping Beauties (2017) Reynolds investigates five graves discovered on a picturesque hillside: I wrote, in my review, “Her rural Ireland is beautifully described without unnecessary frills and furbelows, and she gives us as perceptive a story of the heights and depths of human behaviour as you will read all year.”

So, on to Belfast. There can be nowhere else in Britain where the streets are so haunted with memories of violence, and where the very air has the tang of bitter sectarian division. In Blood Will Be Born by Gary Donnelly, we learn that although The Good Friday Agreement brought peace of a sort, old grudges and violent resentment are never more than a hard stare away. DCI Owen Sheen is Belfast born and bred, but is currently serving with London’s Met Police. He has been seconded to work with the Historic Crimes Unit of the PSNI. He is no stranger to sectarian violence. When just a boy he barely survived a bomb blast which killed his brother while they were playing in the street. His first case with the PSNI sees him going head to head with a senior Republican assassin, and a young psychopath who, despite being clearly deranged, is very very skilled. My take on the book? “..breathtakingly violent, vividly written and a bleak commentary on a seemingly terminal bitterness which makes normal human beings behave like creatures from a warped vision of hell.”

The final stop on the first half of this odyssey is Manchester, and we find another dystopia which is just as nightmarish as Belfast, but just with a different accent. Joseph Knox introduced DC Aidan Waits in Sirens (2017) and it was clear from the start that this was something a little out of the ordinary. Waits is not only pretty much at the bottom of the police hierarchy, but he has a drug habit as well as being connected to one of Manchester’s more psychotic gangsters. I said, of Aidan Waits’s most recent outing The Sleepwalker (2019) “Knox has his grim fun with a Manchester police force that is barely honest, city down-and-outs who have lost most of the trappings of humanity, and an infestation of tattooed, Spice-addicted thugs straight from Central Casting – with Hieronymus Bosch as the agency’s head of HR.”

About David Prestidge and Fully Booked.

FULLY BOOKED is written and edited by David Prestidge. He is a former Assistant Headteacher, and for some years wrote for, and helped edit the website Crime Fiction Lover. He is married, with four grown-up sons, two grand-daughters, and lives in the Cambridgeshire market town of Wisbech. He is a great admirer of local writer Jim Kelly, but believes that The Nine Tailors, by Dorothy L Sayers, captures the essence of the Fen country like no book before or since.

His Desert Island choice of reading would be a collection of stories by Derek Raymond, if only because Raymond’s bleak vision of humanity would be very effective in persuading the castaway not to attempt foolhardy escapes. David is also fascinated by any kind of criminal activity – fictional or real – set in London, and in particular, the Ripper murders, the Tottenham Outrage, and the Shepherd’s Bush killings of 1966.

When he is not reading crime novels, David sits and admires his collection of guitars and mandolins, and wishes he had the musical skill to do them justice. Once a fully paid-up member of CND and the Anti Apartheid Movement, he admits that his politics have moved to the right in old age, but hopes that his sense of compassion and fair play remains untouched by this shift.

On a negative level, David admits to being lukewarm about graphic novels, interactive games and apps, most pulp fiction and – his greatest mea culpa – the passionate love affair many readers and critics have with anything Scandinavian, irrespective of merit. FULLY BOOKED can be found on Twitter and Facebook.