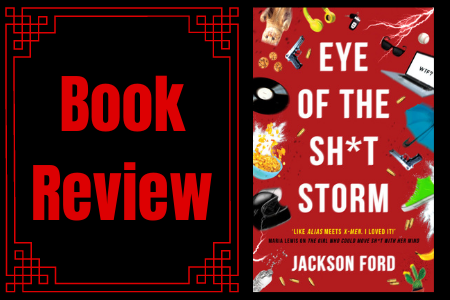 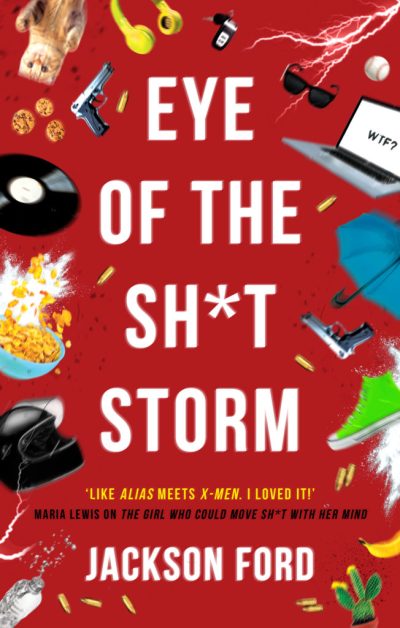 Teagan Frost might be getting better at moving sh*t with her mind – but her job working as a telekinetic government operative only ever seems to get harder. That’s not even talking about her car-crash of a love life . . .

And things are about to get even tougher. No sooner has Teagan chased off one psychotic kid hell-bent on trashing the whole West Coast, but now she has to contend with another supernatural being who can harness devastating electrical power. And if Teagan can’t stop him, the whole of Los Angeles will be facing the sh*tstorm of the century . . .

Eye of the Sh#t Storm is another non-stop thrill ride and the third book in the wildly entertaining Frost Files series following on from The Girl Who Could Move Sh#t With Her Mind and Random Sh#t Flying through the Air. I’ll say that yes, you could read Eye of the Sh#t Storm as a stand-alone, there’s enough background given to grasp in broad strokes what has previously happened, but I’d suggest starting from the beginning and experiencing for yourself all that Teagan and China Shop have been through. The action and adventure, the damage, destruction and drama that follows as they go from crisis to crisis, the madness, the loss, the hell that they have endured, and the continuing conflict-filled and fraught relationships that are present within the team.

The Girl Who Could Move Sh#t with her Mind saw Teagan Frost learning how to control her psychokinetic (PK) powers, finding out that there are others in the world with superpowers, and Teagan was also framed for murder and given twenty-four hours to prove her innocence. Random Sh#t Flying through the Air saw Teagan and China Shop taking on Matthew, a four-year-old genius earthquake-causing toddler who unleashed ‘the Big One‘ on LA causing widespread damage and devastation to the city.

Still reeling from the events and loss suffered in Random Sh#t Flying through the Air, Teagan and the rest of China Shop can’t seem to catch a break. Eye of the Sh#t Storm is a case of out of the frying pan and into the fire, and once again the stakes are high as Teagan and the team find themselves thrown into another chaotic adventure.

Starting a couple of months after the earthquake, in the aftermath and with LA still reeling Eye of the Sh#t Storm begins with a ferocious high-speed chase that sees Teagan and China Shop pursued by a gang of bikers after their latest job goes terribly wrong. The job should have been simple, acting as buyers, all China Shop had to do was broker a deal and acquire a sample to prove that the bikers were gun-running high-powered military-grade weapons in LA, easy.

However, their cover was blown and the bikers knew all about China Shop and that it is a front for a US government-run operation. Escaping, Teagan’s PK picks up something strange and the team discover a meth lab and a large amount of meth. To keep it off the streets, China Shop take the meth, but the detour and delay mean that on their way out they drive straight into the furious bikers who are looking for them.

Destruction and mayhem ensue as the bikers chase China Shop through the LA storm drains before a spectacular crash and a meth explosion ends the chase, and that’s just the beginning.

China Shop hasn’t even made it back to their base of operations when the team receive a call to investigate the impossible, an entire building has been electrified. It’s China Shop’s job to ascertain whether or not the electrification of the building is being caused by someone with superpowers, and if so, to stop them before they can destroy even more of the already decimated and barely hanging on LA which sees them come up against the ominous Zigzag Man, their most menacing foe yet.

Wherever Teagan Frost goes, she is a beacon for chaos and it always follows her. She’s trying to be better, to think things through, to not rush in and to be more of an adult, but whatever decisions she makes the end result is still always the same, chaos. Teagan is a sarcastic wise-ass with a superpower, but she is very much not a superhuman. She is flawed, like the rest of China Shop.

Teagan is an absolutely terrific main character with a big and bold personality that shines neon bright, but the rest of China Shop aren’t just bit-part players in what could easily be ‘The Teagan Show‘. Along with Teagan, the whole team are well-developed and a couple of her teammates have their own big personalities to rival her. Each member of China Shop shines brightly when given the opportunity in Eye of the Sh#t Storm and all add something of their own to the story.

There is a depth to the dynamics on display between Teagan and the rest of China Shop, especially between Teagan and Annie who have always had a strained relationship, but which is stretched to breaking point in Eye of the Sh#t Storm. Teagan and China Shop are a likeable and eclectic bunch who you can’t help but be drawn to, invested in and root for.

The story unfolds through Teagan in the first-person with occasional chapters by Reggie, hacker extraordinaire, tech expert and fellow China Shop member in the third-person. The pacing is fast, doesn’t ease up and goes full throttle from beginning to end. The writing is energetic, vivid, full of heart, packed with emotion and includes plenty of pop culture references. As an extra, I love the acknowledgements at the end of the book, they aren’t written by Jackson Ford, but by Teagan and they are absolutely hilarious.

Eye of the Sh#t Storm is an action movie masquerading as a book, the only difference is that action movies aspire to be this good.

9 thoughts on “Eye of the Sh#t Storm by Jackson Ford Book Review.”